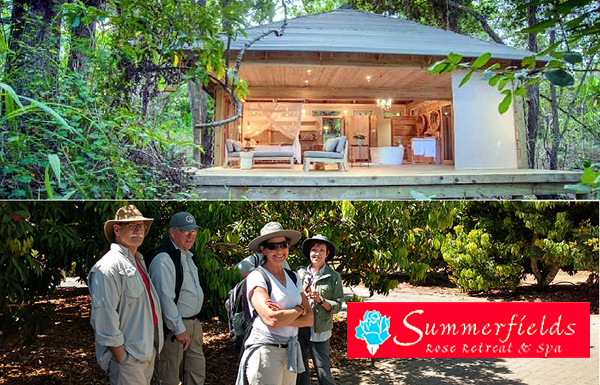 We just completed two nights at a lovely Drakensberg resort carved into a macadamia and lychee plantation that also grows and markets roses! The aromas – particularly now in spring – were fabulous!

Andre & Ilse van Heerden’s 100-acre farm rolls down from the lower hills of the Drakensberg into a small river. Their 12 raised canvas guest cabins all overlook the river. It was an extremely comfortable interlude, but the most interesting time was when Andre explained to me at dinner how Trump tariffs were destroying his macadamia business. And he exports most of his nuts to China!

Unintended consequences seems to be the feature of our current historical epoch. I know how very angry South Africans are with Trump and much of his expressed policies, but this was a zinger that I’m sure neither Trump or his advisors know anything about, whether they care about it or not.

Andre’s hundreds of macadamia trees are actually only a small portion of the relatively new but fast growing industry in South Africa. There are ten times as many nuts produced in the country today as twenty years ago when the industry had just really begun (4300 vs 44610 metric tonnes). Most is produced in the area where we spent the last two nights.

When the industry started, the presumption was that South Africa would be competing with other major macadamia producers like China, certainly a tough nut to crack! But with China’s growing demand for everything, most of South Africa’s production is now exported there.

China and South Africa are part of a free trade pact so there are no tariffs on Andre’s shipments. How then did Trump effect his trade with China?

According to Andre the ports that normally accept his containers of nuts are now log-jammed as Chinese brokers scramble for extra lines of credit to cover the new tariffs coming from America on items like steel and electronics.

Non perishables seem to be weathering the storm as hardly more than an annoyance. But perishables don’t have the luxury of floating idly in the ocean for more days than were expected.

It seems like wherever I turn in the world, today, some catastrophe is occurring related back to Trump. If there’s a silver lining in this mayhem it may be that folks will grow more sensitive to how interconnected they are with the rest of the world, whether they wish to admit it or not.

That may be some comfort to me. It’s none to Andre.