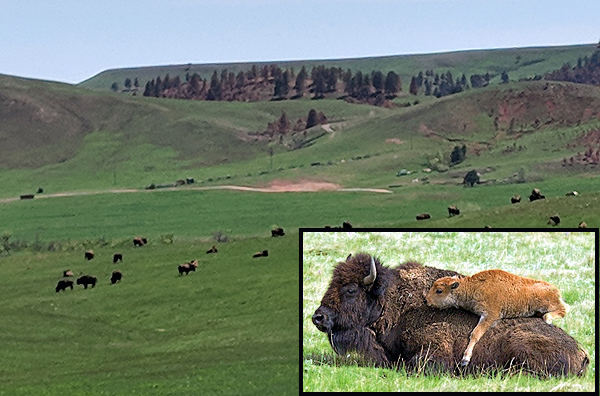 I spotted the first group of bison for a half-second before we continued sailing along the paved road and a ridge obscured the valley in which I glimpsed them. No problem. A gravel track headed out that way.

The “Wildlife Loop” road that runs around the periphery of the park is a nicely paved circuit. There are so many bison in the park you’ll certainly see many of the big, old bulls sitting near the paved road chewing their cud.

But to see the larger herds and the calves, you’ve got to leave the paved road and head to a southern plains area appropriately called “Buffalo Corrals.”

I suspect that a lot of the visitors to Custer State Park miss the nursery herds that are currently flush with bouncing orange calves, because they tend to stay further away from the heavily used paved road.

We followed the Oak Draw Road track for all of a couple miles before reaching the ridge overlooking the plains to the south. The grasslands are deep green at the moment after lots of rain that followed the terrible December Legion Lake Fire destroyed half the park.

Many conservationists were concerned that the fire would disrupt the wildlife population and in particular, cause abortions among the bisons.

Bison calving is normally in April. It’s not certain the fire had anything to do with it, but almost half the calves dropped in March this year. They seem fine, and watching the expressionless balls of tight orange fur bound pointlessly from place to place is great fun!

But I just couldn’t stop telling myself, ‘This isn’t Africa.’

There are 1300 bison in the Custer State Park herd and they are managed as carefully as any other zoo group of animals. The 71,000-acre park is entirely fenced and the debate at the moment is whether the carrying capacity of the park is 1300 or 1400 bison.

Every year for the last two decades more bison have been born and survived than the park can support. In great part this is because of the expert wildlife management now applied to captive animal populations worldwide. This is a typical zoo problem which has led recently to debates about euthanasia for many animals, especially lion.

The demand for bison is good at the moment, so Custer doesn’t have to consider euthanasia or culling … yet. In fact one of South Dakota’s most successful tourist attractions is the fall roundup of the Custer herd followed by an auction of the excess animals. This year it will be held September 27-29.

The bison are remarkably tame. Park officials go out of their way to caution visitors against “petting” the bison, yet we watched one couple let their 5 or 6-year old child go wandering out towards a nursery herd!

Other wild animals in the park, including the elk and mountain lion, are not contained by the existing fencing which is created specially for the bison. As a result you’re probably not going to see them: they’re wild.

The fencing is key to Custer’s success. The ranchers on the periphery of the Black Hills of South Dakota and Wyoming don’t like bison – which eat substantially more grass than a cow – competing with their own stock.

Following December’s terrible fire numerous volunteers teamed up with conservation and state organizations to rebuild Custer’s fences before winter ended and the ranching season started up.

It was an heroic effort. Braving 20 below temperatures while some of the fire was still glowing, crews hammered new fence into rock-hard ground over 16 miles that was considered especially critical to keeping the herd contained.

Private donations of hay also helped sustain the herd through the end of winter.

The park is one of the most beautiful areas we’ve so far encountered in our trip through the near west. Even though more than half of it has been destroyed, the glens and streams and yet standing pines are strikingly beautiful. I watched an accomplished prairie falcon snatch a courting western tanager, saw brilliant pinyon jays and groups of turkeys that have a distinctive white spot on their rump – totally unlike ours near the Upper Mississippi.

Prairie dogs provide endless entertainment, by the way! We saw several “villages” throughout the park.

And even as I slap myself for thinking again, ‘This isn’t Africa,’ I realize how important that thought really is. We have yet to see Yellowstone, and I know first-hand that much of the wilderness of Alaska does not provoke this obsessive thought.

I loved Custer. But … it’s not Africa.