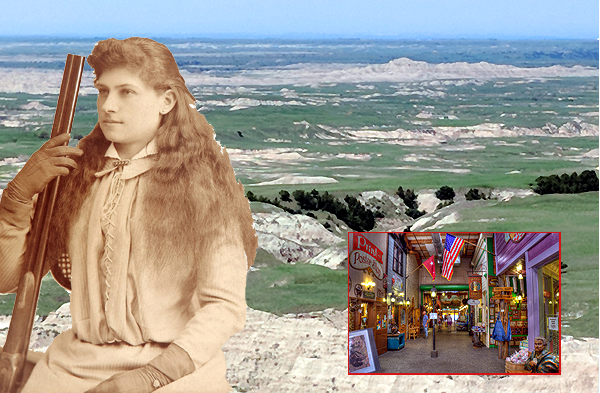 Sunday in Wall, South Dakota, is not unlike any other day at first glance. The town is jam-packed with tourists. This is because the town is the Wall Drug Store, founded in 1933, an enterprising theme park that collects tourists off I-90 like black flies off the Black Hills, motorists at their wits ends after 12 hours of driving through flat cornfields.

Main Street is Wall Drugs on one side and Wall Drug spinoffs on the other side. Wall Drugs is a half-mile of winding creaking corridors of fudge shops, gun dealers, American flags, skin sellers, tonic brewers, restaurants, western clothing dealers with every clerk dressed like Annie Oakley or Roy Rodgers. Roy Orbison booms behind the many old photos plastered everywhere and if you accidentally bump into an employee in the halls, she courtsies or he bows.

There are 605 people living in Wall, South Dakota, and they go to four churches. Everyone works for Wall Drugs and most everyone goes to the Evangelical Free Bible Church in shifts on Sunday so that the tourist trap doesn’t close.

There is probably no other national park in America that proves evolution as strikingly as the Badlands. The Evangelical Free Bible Church does not believe in evolution. The church believes that the world was created in just over 6000 days.

In fact no dinosaur fossils were ever found north or south of the Badlands all the way up to the Arctic Circle and down to the Gulf. That’s because when the dinosaurs roamed the earth, this wasn’t earth. The Badlands was ocean.

The Great Arctic Sea cut what would become America in half. It was fairly narrow, but it went all the way from the North Pole down to Panama.

Scientists have found fossils in the Badlands during that time, beautifully illustrated by national park signage throughout the park and at the Ben Reifel Information Center. During the age of dinosaurs the fossils discovered in the Badlands … are fish. Dinosaur fish like ammonites and nautiloids, nothing terrestrial.

In fact this is such an important place for fossils that many scientists consider it the place where paleontology began! A fossil jaw found in 1846 was the first widely accepted piece of evidence that there were some very old things that preceded us!

So seven miles south of the Wall Drug Store and the Evangelical Free Bible Church is the one of the world’s most useful sites to prove and explain evolution.

What ‘on earth’ has caused Americans to so disregard simple science? What part of the old Great Arctic Ocean don’t they get? Why on sacred Sunday is Wall Drugs packed with people who don’t believe in evolution?

How ‘in South Dakota’ can residents only seven miles away from one of the most critical and stunning proofs of evolution deny it?

These questions obviously baffle and infuriate me. I’m almost ready to admit they’re rhetorical, and that I know the reason is that America has under-educated itself. But that’s not enough. The patrons of and the residents of Wall, South Dakota, may not only lack the educational skills necessary to understand and embrace evolution.