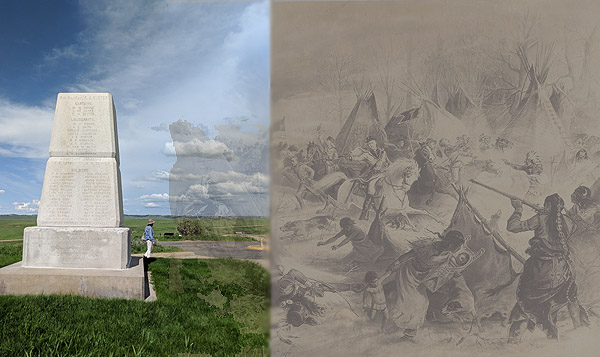 The Maasai of East Africa, the Rohingya of Myanmar and even the 4th generation Rhodesian farmers of Zimbabwe are inhumanely imprisoned in modern societies incapable of figuring out how to assimilate them.

No better example of this conundrum than America’s own native Americans. We visited the site of Little Bighorn. It’s one of the most moving national monuments in our country.

On June 26, 1876, American Indians’ long struggle against the new America effectively came to an end, ironically with their victory over General George Custer’s “last stand” at Little Bighorn.

“Came to an end” because Custer’s disaster so infuriated the New America that Congress quadrupled military funding to eradicate the American Indian. Within a few years no Indians roamed free, instead confined to horrid reservations, and this included the Lakota and Cheyenne parts of the Sioux that had defeated Custer.

By the early 1890s, the hundreds of broken treaties with native Americans, the refusal to even implement agreements that Indians were still trying to honor, and the final wiping out of the bison (perhaps as few as 100 remained), the story of the American Indian was over.

Sort of. In my opinion the story gets progressively worse. Although as a nation we’ve had some proud accomplishments dealing with our native American past, the treaty with the Alaskan Athabascan is the most obvious, we’ve mostly had failures.

The concept of an Indian Reservation is little more than an unfenced prison. Stipends keep humans alive, but there is nothing to nurture their creativity and ambition. The entire object is to contain and sequester.

Laws that gave some tribes, especially those in the Midwest, the right to circumvent law that prohibits gambling may have increased some community’s revenues, but it’s done little to lift their spirits and hope.

This is exactly like what is currently happening to many of East Africa’s Maasai. That debacle began in 1972 when they were forcibly removed from what is now the Serengeti and when they struck a treaty with the Tanzanian government that limited their advancement in return to keeping some of their land.

I’ve thought about these things a lot in my life time. I’ve worked and lived so closely with important Maasai, and my next book is dedicated to them. Visiting Little Bighorn made me realize this is not an African or American problem. This is a problem of human greed generally sparked by moments of extreme opportunity for one group of people but only at the expense of another.

The wrong has been done and it’s important to apologize. Many societies, like the Belgians regarding the Congo and the British regarding some of their colonies, and pointedly the Canadians regarding their own native Americans have all done so. America has yet to do so. This is a necessary first step.

But the steps which follow have not rendered terrific results. I don’t know the solution, though I’m inclined perhaps by impatience to believe immediate assimilation in the modern society is necessary. This would mean nullifying any “treaties” or special laws that treat Indians differently from any other citizen.

Many native Americans oppose this, so it may not be the right answer.

But we can’t continue as we are. We’re touching a new moment in human history, when our unity is paramount and fracturing ourselves into little ethnic pieces will do nothing but hasten our collapse. Little Bighorn is our reminder of how much we have to do.