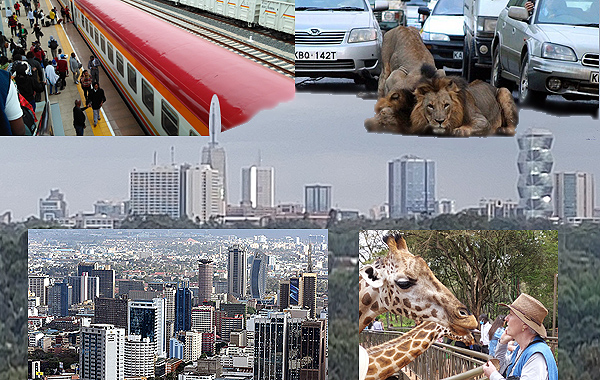 Once I really liked Nairobi. But our two-day visit here was like walking back and through a time warp in an nondirectional universe. The pandemic did a number on a lot of things. I was here just before the pandemic and I swear some crazy aliens confiscated the city, goofed around with it and just now dropped it back down to earth!

There are highways, sometimes multistory, all over the place. The 27 km southern bypass is reported to have been built in two years, all of it elevated and on each of the four sides of the hundreds of concrete pillars on which the concrete sits three stories above the ground are at least 500 tiny holes each containing a live nasturtium plant kept alive by the rain drainage from the highway above!

The all glass ten-story BMW building in Westlands looks like an alien pupae ready to hatch. Lions wandering out of the adjacent Nairobi National Park disrupt the morning rush hour. The new high-speed train to Mombasa trumps any Amtrak. The traffic is never-ending. There doesn’t seem to be a night.

There also doesn’t seem to be a plan for any of this. The numerous modern, super-colorful buildings twist and turn and bend down on each other and grow out of the potholed dirt roads underneath them like mushrooms in a mythical forest. Each has its own weirdo designs and I’m absolutely certain they’re all going to fall down.

It’s a colossal urban mess! And yet…

You can now get into the city center in a matter of minutes instead of hours even though there are more cars than ever. Street lights are gone, but the police traffic controllers really do a good job. Most trucks are banned from the city center at last, and public transport has been doubled. Airplanes are flying all over the place and don’t crash into one another. This is managed mayhem… but it seems to be working! I can’t say it’s pretty, but it is definitely visually stimulating!

Our day of touring was easily accomplished in a fraction of the time it took me four years ago because of horribly unmanaged traffic. We toured the museum, Giraffe Center, Blixen museum and Kazuri Beads at opposite ends of the city.

What was unthinkable during a weekday four years ago, is now routine.

So what can I say? That the nostalgia of an old man who loved to walk the city among its old colonial buildings is embarrassing?

Times have changed. But which time zone exactly?