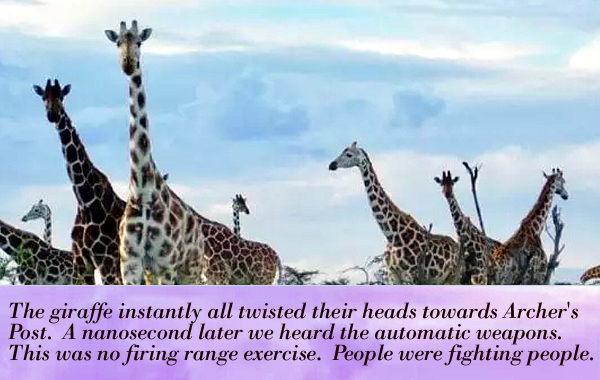 I haven’t delayed telling you. It’s just been an awfully busy time. Our two days in Samburu were cut short by automatic weapons and mortars. Everyone is fine, excited to keep going, we immediately returned to Nairobi and I’m infuriated that the Kenyans have wrapped this up. After one day of oblique reporting, the trouble in Samburu which we experienced first-hand is as if it had never happened.

That’s no way to boost tourism.

It was a wonderful if unexpectedly short safari out of Nairobi. We spent the first day in the tea highlands learning about Kenya’s new and exciting “purple tea,” then we safari-ed through Aberdare National Park seeing rare Jackson’s francolin, bush pig and giant forest hog, overnighting in a tree hotel at 8000′.

Then, we went to Samburu, the prize of this portion of the trip. The contrast between the Aberdare highland forests and the great northern frontier’s desert is breath-taking. You go from one to another in a half day.

We drove past Samburu to the next reserve north, Kalama. I noticed with some concern but no real worry that the airstrip was now taken over by Kenyan military. Hm, I worried, where now were we supposed to fly out of?

Continued to one of my most favorite places in Africa, Samburu Saruni, an incomparably spectacular luxury collection of six villas spread on a giant boulder overlooking more than a thousand square miles of northern Arizona-like Kenya.

After quick cleanups and a wonderful lunch, we headed out to Samburu National Reserve. It’s dry and my heart wept for the animals and plants and people, because two seasons of rains have now been missed. It’s happening more and more with climate change.

But for the untrained this marginal time between “dry” and “drought” is spectacular, because the animals gather around the last food sources and are incredibly concentrated. So we saw nearly 100 Grevy’s zebra. There are only 2800 left in existence. We saw dozens of reticulated giraffe, confined to this area of northern Kenya. And dozens (and dozens) of weirdo looking but totally beautiful gerenuk, a long-neck gazelle.

Also oryx, rare birds, impala and the subspecies of Grant’s gazelle that’s so slick and bright. It was a truly spectacular game drive that had just ended with a family of four cheetah. It was an hilarious 40 minutes watching three rambunctious teenage boys disrupt every attempt by Mom to hunt!

So we were slowly on our way back, not far east of Larsen’s Camp along the dry river that flows north to south into the Ewaso Nyiro sort of opposite Elephant Pepper Camp. We stopped to watch 6 more gorgeous reticulated giraffe in the waning but gorgeous afternoon light.

The giraffe instantly all twisted their heads towards Archer’s Post.

A nanosecond later we heard the automatic weapons. This was no firing range exercise. It came from two different directions. People were fighting people.

I looked at our guide, an outstanding Samburu, and Lepa’s unending smile had dropped to his stomach. He looked at me and we both nodded. Slowly he started to turn the vehicle away.

Then came the mortars. Two quickly and one later. The giraffe panicked and came running straight to us.

I looked at Lepa but he was already flooring the old rover and we were screeching away back to Saruni and safety.

The link above to the KTN report explains probably some of the story. I’ll write a separate blog later about what I think happened and what it all means. But with a mostly sleepless night I got us out of the area the next morning. We had to travel to a rather distant airstrip for obvious reasons, but remarkably, we even had good game along the way.

We’re in Nairobi, now, after a restful night for all. I think I speak for everyone that no one regrets what we did. We weren’t fired on. We weren’t the target. Lepa and the managers of Saruni tried to convince us to stay, and I know they wouldn’t have done so if they felt we were in any imminent danger.

We were just overly cautious, got the hell out of there, and now we’ll go on. No one, I think, would have traded the wonders we saw to have avoided the scare having handled it as we did.

But that won’t, of course, be everyone’s point of view. I’m traveling with veteran travelers, veteran safari travelers. Hiding what happened, which we saw and heard with our own eyes, isn’t good for anything.

This isn’t a start of any serious war or necessarily even projected disturbance. It might be a one-off battle as horrific as it seemed to us. It’s a product of climate change causing drought, reduced social services for a growing population, and most importantly, availability of powerful weapons. More about this in the next blog.

Last reply was 3 weeks ago