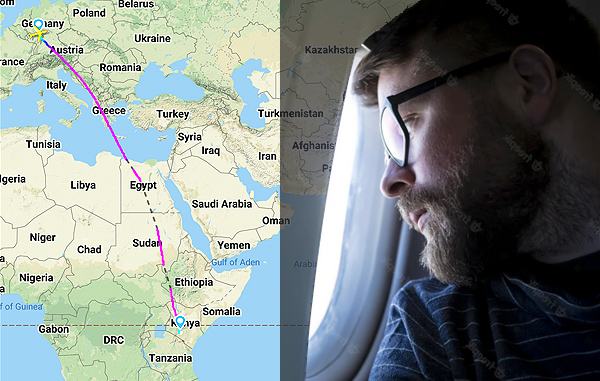 I just love the flight down from Europe to East Africa! Whether from London, Amsterdam, Frankfurt, Zurich or Paris most of the flights are day time and travel over some of the most dramatic scenery on earth!

This time I started from Frankfurt flying over the gorgeous springtime greenery of what many of us Americans consider an overly manicured Europe. But you’ve got to admit those perfectly planted farm fields with bursts of little thick forests all around them are definitely where the Pied Piper is hiding his kiddies!

But it gets quickly more real as the flight skims the Alps. Looking from far above I try to imagine the trekkers who take days and days to reach some personal goal because it’s highest or furthest or most difficult. Even without all the snow that still clings to the lower elevations the Alps are no collection of simple hills. They’re craggy and dramatic and defy even the most overcast weather drapped down their sides.

Greece and Turkey to most of us are cluttered with ruins and some beautiful beaches, but it’s amazing how much wilderness they also have. Many of these mountain ranges and volcanoes are much newer than the Alps, a sign that we’re moving south towards where it all started.

But it’s after we cross the Mediterranean and touch Africa that my smile widens. Can’t fully explain it, but the desert and the desert-defying Nile present such intransigent majesty over us meddling humans. The first impression while gazing down onto the “big granite rocks” (some standing a mile high) which pepper the northern and southern parts of the Sahara is that this part of earth is untouchable, sacrosanct, beyond even our most illustrous quad bikes.

But then I remember a bit of history: Salt caravans documented by the earliest Egyptian civilizations (15th BC), then the gold caravans, then slaves and ivory, and desert wars. The monolithic sandbox might look untouched from 39,000′ above, but in fact it’s riddled with mankind’s implacable wanderings.

And nothing demonstrates more man’s disrespect of Mother Earth’s greatest desert than the Nile!

Usually the flights from Europe follow the Nile quite closely all the way from the sea to Lake Victoria, although darkness usually falls just south of the furthest loop of the Blue Nile right before it leaves Sudan for Ethiopia. But there’s a whole lot to be seen before.

Lake Nasser (or Lake Nubia if you’re Sudanese) is massive, truly gargantuan. Kathleen and I had our first trip to Kenya planned just as the Aswan dam was completed, but it took years for it to turn into the current rorschach shadow over the gleaming tan Sahara that I see out my window, today. It has more fingers than the Norwegian fjords. It remains the largest embankment dam on earth.

Of course I’ve toured it terrestially in Aswan, but there’s no way you get any sense of this human accomplishment from the ground. I think it ranks up with there with the pyramids.

39,000′ above it looks like a massive torn-up fern that fell into a sandbox. But it’s not so bizarre, after all. The first dam in this area was built in the 11th century! A new more powerful dam has just been completed on the Blue Nile in Ethiopia. Nile dams have been a part of human history from the earliest times, a pitifully practical need of a creature so dependent upon water. Ten minutes more flying time south and out of view it’s out of mind.

And instead I’m straining to see the many settlements along the actual great river itself, quite a few over a thousand years old and still thriving. The Nile serpentines all over the place once it leaves Lake Nasser, often cutting back on itself. Everywhere are settlements now towns sometimes cities that mark their beginnings with 7th-8th century pre-Nubian mini-pyramids, the first monuments of our relentless obsession with overlording Mother Earth.

That dominance is mostly demonstrated by irrigation, and today some of the Nile flows through pipes for almost 50 miles off the river into desert gardens! Still seasonal and dependent upon regular flooding it’s nevertheless the reason that The Sudan could feed the entire world. (If it could just get its political act together.)

Not until just before Khartoum – where the Blue and White Niles converge – does the desert ebb and agriculture based on rains begin. To the east are the Ethiopian highlands, some of the richest agricultural land on earth. (Again, if they could only get their act together. One wonders if the piqued Mother Earth has cursed these animate beings.)

Night falls quickly in Africa and the ground suddenly looks like grey fog then just blankness, even while the massive thunderstorms all around us were throwing off mauve and purple and white lightning.

The last hour in darkness before landing is like the tremors of silence that give you goose bumps as the symphony ends. It may be dark, now. But even were it day time I wouldn’t be able to see the cave just below which was where it all started, where man was born.

The journey to Africa for us tourists, just like the journey out of Africa for early man, is marked by ever-changing, profound but beautiful changes in perspective which fuel our curiosity just as it drove our ancestors’ will to survive. What a flight!