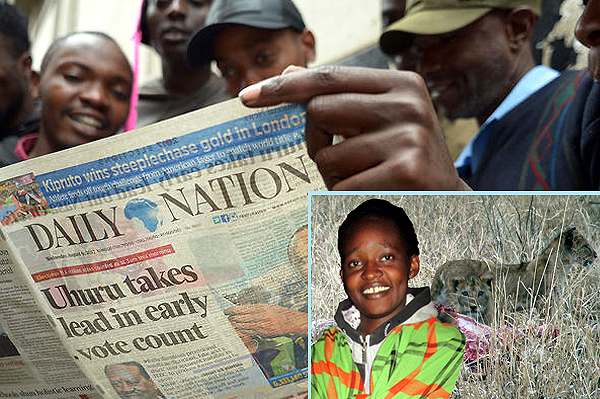 We had a Maasai guide for our final days in Kenya. There are about 500 guides in Kenya’s best game park, the Maasai Mara. Only three are women: “our” Lucy was one.

Two days after national elections, results have yet to be announced but the country looks increasingly like it will accept the outcome peacefully. Lucy won’t be the only beneficiary of peace. In 8 of Kenya’s 47 counties (comparable to our states) provisional results give governorships to women.

There has been violence, mostly in the west of the country where the opposition candidate hails from, and in the slums of the cities, where discontent prevails constantly.

Police have been extremely transparent about the violence, often announcing it before the normal viral spread on social media. Most Kenya media – particularly TV – has refused to report the violence, an interesting but one might now conclude a successful restraint. To find out about the violence it’s necessary to survey foreign media.

Almost every other commercial on Kenyan TV is an extremely slick advertisement about the importance of remaining peaceful. Full symphonies behind multi-ethnic, multi-generations of beautifully coiffed Kenyans singing the national anthem actually raised goose bumps on me.

I don’t know how Lucy voted, but I know that whatever the results, peace will secure the only universal dividend for everyone in the country. My understandings of history suggest revolution often does, too, but the violence that arose here in 2007 as horrible as it was fell far short of an actual revolution.

Rather, it was just the less fortunate, less resourced who suffered so badly.

And there’s every indication that would happen, again. Those in power would remain in power and those protesting would be hurt badly.

The opposition candidate produced a document that he said was a log of one of the more sensitive computers from the commission running the election.

The log suggests that around mid-day on election day an algorithm was inserted into the tallying program by hackers that skewed the results for the incumbent.

The commission promptly said it would investigate the document but then later reaffirmed that it had confidence that its computer system was not hacked. Former Secretary of State, John Kerry, issued a similar statement.

But the commission will not declare final victors until those digitally transmitted results are corroborated by a paper document manually transported to the center from the thousands of stations.

That document is a sign-off sheet, on which agents of all candidates agree to the results shown.

This announcement is expected today or tomorrow, although the law gives the commission until next Tuesday to do so.

Lucy was born in a typical Maasai village not far from the Mara. Because of progressive Kenyan policies that mandate free primary school education, Lucy was among the first girl Maasai ever to go to school.

She told me that she planned on becoming a teacher, “because that’s what girls [who performed well in school] did.” But she was fortunate enough to raise the money to go on a field trip to Nairobi.

“At the museum, it was a lady who took us around and explained everything. I realized at once that I could be anything I wanted to be.”

She continued to perform well in school, attended a vocational “conservation” college and received her guide’s license. First, though, she worked for a foreign NGO in the Mara to develop her natural history skills.

This is the second camp for which she’s worked. She’s in high demand.

Lucy and the new women governors of Kenya’s countries are a product of a progressive political system. To be sure that system is also rife with corruption, malfeasance and inefficiency, but as you can see, it’s not all bad.

For Kenya, the most important maxim right now is to give peace a chance.