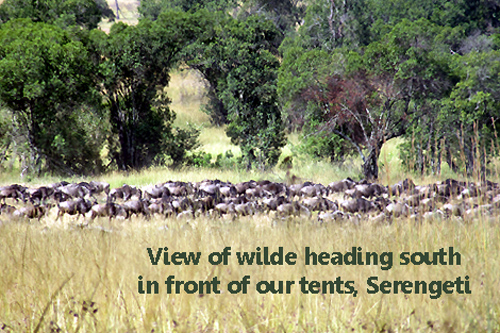 The border between Kenya and Tanzania has been closed in the Mara since 1979, but that didn’t stop us!

Historically, the great wildebeest migration has been in the Mara regions of the Ngorongoro/Serengeti/Mara ecosystem from July – September. This is when – historically – the rains have ended in the south while continuing here in the north.

The Mara is Kenya’s best wilderness year-round. After a complex dispute between the two countries in 1979, the all important Mara/Serengeti road and border posts were shut down, and they’ve never been opened since.

This was our final day in the Mara region of the northern Serengeti, still Tanzania but the Serengeti right to the Kenyan border.

We saw lots of wildebeest, not a lot of zebra, a dramatic river crossing and this morning, two male cheetah just waking up to hunt.


Historically we’d be lucky to see as much as we did these last three days. But the weather’s changing and more of the entire ecosystem is wet for longer than in days past. So I was anxious to know what was happening just across the way in Kenya.

The Mara River is pretty mean, wide and raging where we were staying, and it’s an effective obstacle to going north to Kenya.

There is one cement bridge built years ago when the rivers were all smaller and shallower. It’s usually covered with water, and I expected it would be again today because it rained last night.

Three weeks ago when I was here with another safari there was about three inches of water over the bridge. It’s a false idea that it would be safe for a 1 ton Landcruiser. In fact someone tried (not us). They were fortunate not to be levitated by the water, which is common, but …

Today there were about 4 inches above the water, and I was surprised, so immediately off we went towards Kenya!

As soon as we crossed that little bit north the terrain changed considerably and looked exactly like the Maasai Mara I know so well.

There were far fewer trees and bushes, the grass was shorter, and so the vistas were grander. There were lots more visible animals: gazelle, topi, warthog, giraffe – even impala, and of course wildebeest. 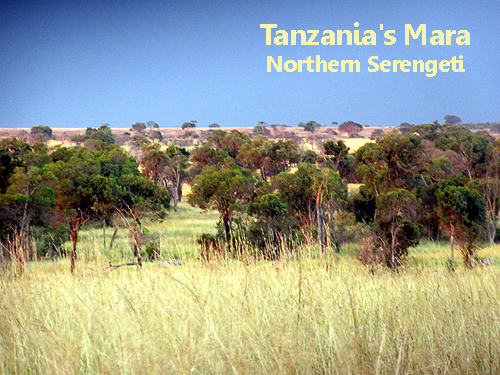 Not a lot. Not as many as I expected. But the terrain reminded me that the beautiful savannah before us is a product of elephants felling forests, a primary among several ecological dynamics. The extraordinary corporate poaching of elephant in the Serengeti in the 1970s and 1980s as opposed to the much better patrolled Kenyan Mara had the unexpected effect of prolonging the northern Serengeti forests.

That’s changing, of course. We are seeing more and more elephant in the northern circuit in Tanzania and lots of felled trees!


We continued towards Kenya and off to my right I saw a fallen tree in the distance. Underneath resting in its scattered shade were two male cheetah.

Undoubtedly brothers kicked out of their family at the same time, one was clearly agitated, looking all around him and feigning yawns. In the distance was the small group of Thomson’s gazelle that I knew he was contemplating.

His brother was snoozing, but as soon as he stood up, his brother woke up and looked around, amazed to see us.

Nevertheless, cheetah are remarkably docile and friendly animals. They’re no more scared of us than they knew we’re unafraid of them.

We left the brothers to continue to the Kenyan border.

The border is marked by a stone pyramid. Several tracks lead to it from the Tanzanian side, and one from the Kenyan side, down from the Mara Serena hotel.

Anthony and James cartwheeled over the border, in complete defiance of visa regulations! Then, we took a group photo on the Kenyan side of the marker!

Then, fortunately, two Kenyan safari vehicles came up and we chatted with the drivers for some time. Such scant information hardly a good report makes, but they claimed there weren’t any large numbers of wildebeest in the Mara … “yet,” they said.

But we’ve been seeing them come across the Mara to the Tanzanian side for several days, now. Still, the amount of wilde we’ve seen – while impressive and much greater than historically would be the case – it was still hardly a big fraction of the two million animals that make up the great migration.

(Unfortunately, I don’t think waiting will help. The rains are returning early, and those wildebeest on the Tanzanian side are beginning to move south already.

As I sit writing this back in our Lemala Camp, the blarting of thousands of wildebeest which have just crossed south over the Mara River prompted me to take the title picture above. It seems like all wilde are now moving south, away from Kenya.)

So taking our pack lunch we returned over the cement bridge and traveled along the southern and eastern banks of the Mara seeing once again the great carnage of multiple crossings.

We also saw hippo and giraffe, and a cute scene where a just young adult male elephant charged a line of wildebeest.

He’s just had enough of them, I guess!