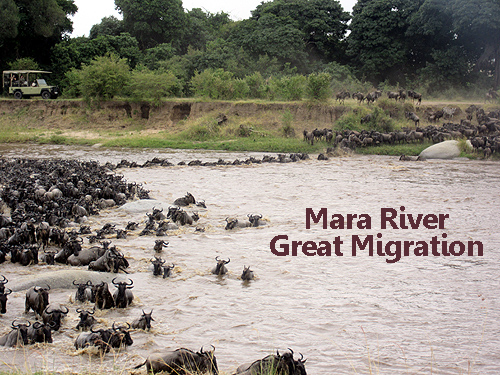 Astoundingly, thousands of wilde were amassed on both sides of the river. Were they going to run into one another, increasing the carnage exponentially?

Every day I see new confusions in the wild as climate change accelerates. My safari headed out this morning specifically to try to see a great wildebeest migration river crossing, presuming by the calendar it would be from Tanzania into Kenya.

We were lodging on the Tanzanian side of the Mara River. 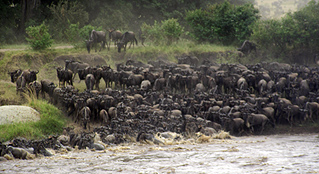 Historically, the 2 million animals involved in the Great Migration will be found almost exclusively in Kenya at this time of the year.

That’s because, historically, the rains south of Kenya have ended. Only in Kenya’s beautifully spectacular Maasai Mara does rain almost every day of the year except in October and November.

Wilde don’t need rain when there are such wonderful rivers as the Mara, Sand and Balagonjwe around. They need grass. Lots of grass. So they travel with the rains, because the rains grow the grasses they have to have.

But in the last decade the rains have gone bonkers. See many of my previous OnSafari blogs throughout the year to see how strange the rains have been and subsequently, have fractured and unpredictable the migration is.

Nevertheless, we had just come all the way through the Serengeti, from the very south. We knew first had that the south was desiccated, just massive swirls of dust over the veld. (And, by the way, hundreds of thousands of nonmigrating Thomson’s Gazelle which need no water in the dry season.)

So until we reached the Mara section of the northern Serengeti, I was pretty sure that conditions were more or less normal, and that it would be great luck for us to see many wilde at all, much less a river crossing. 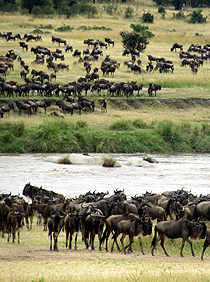 But as we left the western corridor at Ikoma we began to see clusters of wilde, several hundred strong, here and there as we drove quickly north.

We reentered the Serengeti at Mugumo and even though the grass was shoulder high there were more and more wilde and even greater numbers of zebra.

My hopes improved! We got into camp late, a beautiful property right on the Tanzanian side of the Mara River. We went to sleep with sounds of elephant trumpeting, hyaena howling and one persistent leopard grunting.

Michael Ertle said he slept only about an hour, because of the persistent gnawing of grass at the edge of his tent. It was zebra. When it rains, the tents direct the water over the eaves where then the most nutrient grasses grow.

So after a quick breakfast we headed out along the river. We made numerous stops for giant crocs, dozens and dozens of them. One I spotted was at least 14 feet long.

But I also noticed lots of dead wilde. That in itself isn’t so unusual, but there seemed to be an unusual number of them and in very radically different states of decay.

And the largest congregation of vultures I’d ever seen. Julie Graham asked if I could estimate how many, and I really couldn’t. I’ve learned to estimate animals on the ground, but the swirls of vultures were daunting. 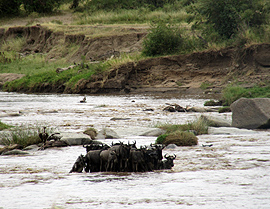 These unusual sites meant something unusual was afoot. The obvious conclusion is that the carnage on the river was greater than normal. Why?

Soon we would learn why. About 15k east of camp we came upon two massive groups of wilde, on opposite shores! Each side looked like it was about to plunge across.

Given the large number of wilde still grazing on the Tanzanian side, clearly the unusual rains had disturbed the predictable course of the migration. Obviously, from our very immediate experience, wilde were crossing both ways, and often.

We parked ourselves about 200m up from the river so as not to disturb the movements. It was around 11 a.m.

Numerous times each side seemed to make a move. There would be agitation and some prancing, wilde moving onto the sand bank but then darting back and drawing dozens back with them.

From the horizon both sides were being pressed by more incoming lines of wilde, migratory files moving in exactly the opposite directions of one another.

It was nearly 12:30p and the standoff continued. Part of group returned for lunch and the lucky die-hards stayed with me. 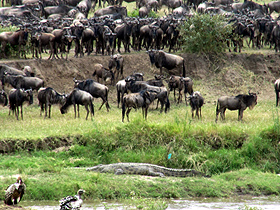 About a half hour later I saw one wilde put his left hoof into the river and I swear it was less than 5 seconds and dozens of wilde started the plunge.

Soon it was a thick of mass wild, loud blarting, splashing and difficult swimming against the strong Mara current, each pushing one in front of them further into the river towards the other side.

The first made it about 7 minutes after the initial plunge. Mothers would stop and turn back, having lost their young. Some, caught by the strong current, were swept onto rocks unable to dive back into the water without drowning.

But most remarkable of all, no crocodile take-downs. When I’ve seen this before, there are dozens of crocs. This time, we saw crocs resting among the running herds and not moving!

The wild are hard-wired to move aggressively and rivers beckon them as their greatest challenge. If there is good grass on both sides of the river, they’ll cross back and forth without other purpose.

That has led to one of the greatest carnages I can remember on the river. And that’s the reason there were no croc take-downs, today. 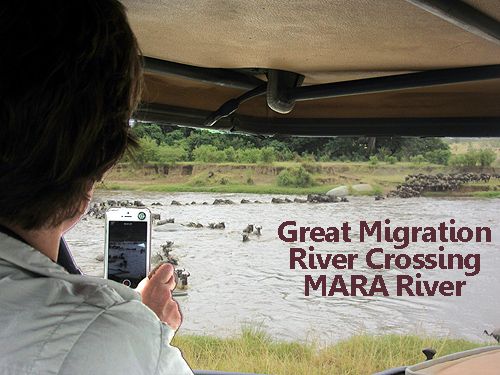