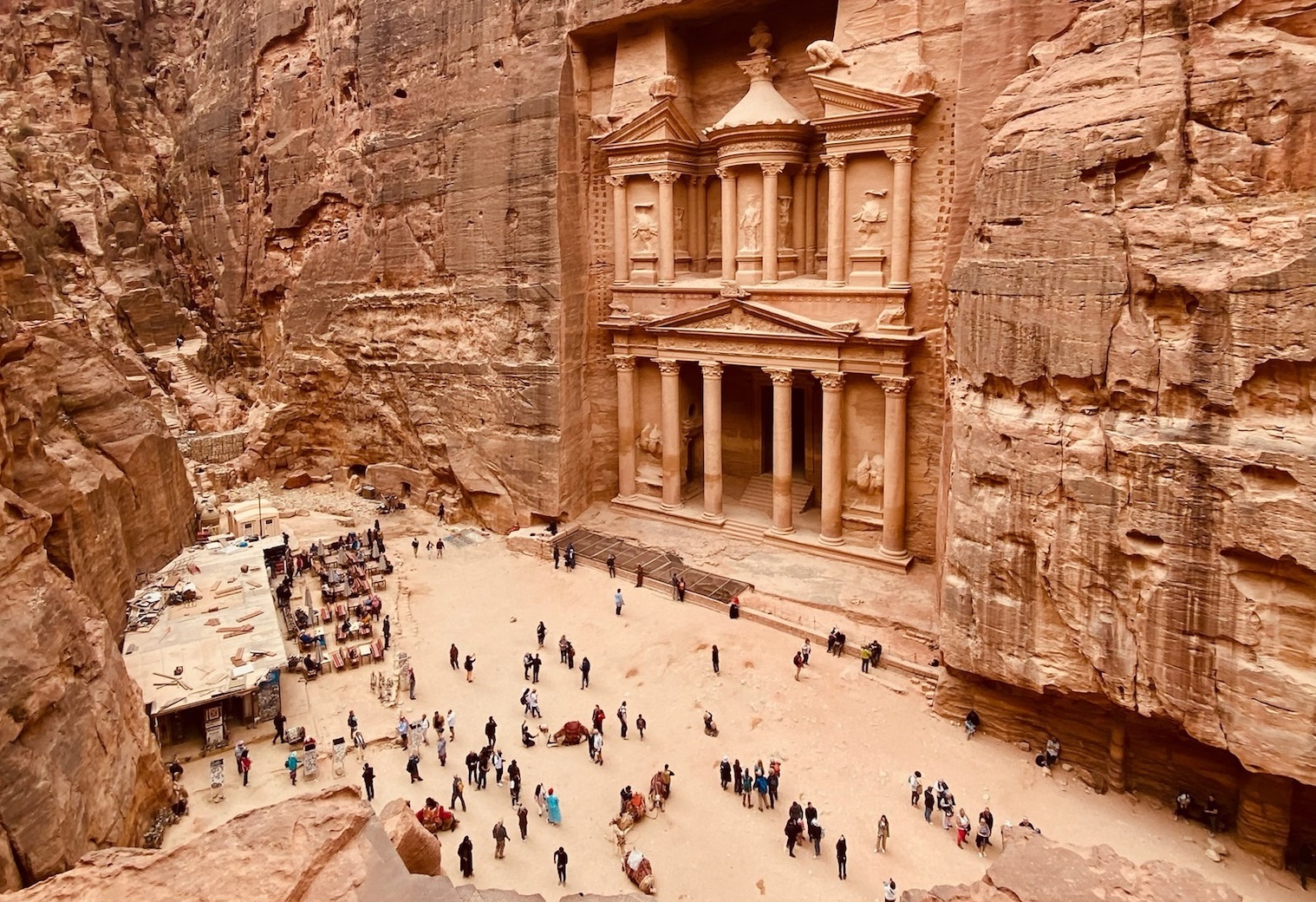 We just finished seven days in Jordan: Two fabulous rest days on the Dead Sea, playing Lawrence of Arabia in Wadi Rum, and of course Petra.

Nine out of ten tourists travel to Jordan for a single attraction: Petra. Most of those are day-trippers or one-nighters from Red Sea cruises. Our guide told us that tourism is back in spades following Covid and that there are now about 4,000 visitors daily to Petra.

I’m generally not one to join crowds. Couldn’t stand Pompei with its thousands and thousands of visitors, so I was a bit apprehensive about this visit.

But as Kathleen and I stood on a trail a couple hundred feet above the main thoroughfare of the city, watching the thousands of tourists below, I got the sense of what it would have been like 2000 years ago when this city was flourishing with 20,000 residents.

Petra shares with Egypt’s Luxor and Karnak the astounding scale of its monuments. The first thing you see after a 2k walk from the visitor’s center is the famous, confusingly-named Treasury. It stands twice as high as Egypt’s Ramses sculptures at Abu-Simbel. Turns out this incredible monument was actually the palace of a Nabatean king, and the first Bedouins to see it reported that it contained enormous treasures. Hence, “treasury.”

The city prospered for 400 years under a single family kingdom. Many locals here describe modern Jordan as just beginning a similar path. The current King (Abdullah II) is a fourth generation Hashemite royal who was installed by the European powers after the Great Arab Revolt of the area in 1916.

When we asked our guide, or a waiter, or bumped into someone in a café and brought up the “kingdom,” the remarks were universally the same:

The King (Abdullah II) is our Father. We are his family. “Family is the most important thing in Jordan,” I heard multiple times.

Egypt is technically not a kingdom but the general in control is effectively a king, and the draconian laws that suppress free speech and protest are similar to such laws in Jordan.

The great city of Petra, the breath-taking monuments of Luxor and the Pyramids – none of these would exist in my view without draconian rule:

No House Ways & Means Committees to safeguard funds for social safety nets. Although the Jordanians are quick to claim that no slaves were used to build Petra, that is frankly very hard to believe. The Egyptians make no such claim.

One of our group members, Karen Higgins, runs a Hollywood set construction company. I watched her jaw drop when we were told how the 40-meter high pillars of the Treasury were carved so perfectly:

According to our guide, “engineers” positioned themselves on the cliff opposite the Treasury and yelled out adjustments to the actual sculpturers.

Be that as it may, Karen confirmed that the perfection of these columns would today require computer technology.

In local guide lore the first Nabatean king who conceived Petra was Rekem. Guides here present an universal story that Rekem and the generations of family kings who followed him built the city on plans conceived during his reign.

Kind of hard to believe, although the order of the city, its critical aqueducts and residential areas, mosques and fields for agriculture, are remarkably logical. Well, whether conceived by some genius engineer under the King Rekem or methodically expanded over the next 400 years, it’s still a feat that’s unimaginable today without your laptop.

Antiquity’s laptops were kings. If their programming was flawed they didn’t last long. But with the programming of Rekem a wonder of the world was created.

To justify Petra as one of the Wonders of the World, UNESCO claims, “The Outstanding Universal Value of Petra resides in the vast extent of elaborate tomb and temple architecture; religious high places; the remnant channels, tunnels and diversion dams … which controlled and conserved seasonal rains, and the extensive archaeological remains including of copper mining, temples, churches and other public buildings.”

(Those are UNESCO’s upper-case words, not mine.)

Petra “represents a unique artistic achievement and an outstanding architectural ensemble of the first centuries BC to AD… [bearing] exceptional testimony to the now lost civilisations.”

Now there’s nothing in this lavish praise that says monarchies are better than democracies. But I think it’s pretty clear that your local zoning board wouldn’t approve Petra and the DA would be suing for an injunction against forced labor.

So we praise antiquity and thereby empires. From time to time we build a grand football stadium. Abe Lincoln’s monument is pretty impressive. But in the main we don’t allocate public resources for individual adulation.

But, you know, it’s really cool. Does that mean that I approve of the horrors of the time that brought it into being? Or, more palpably that freedom and liberty were impossible in ancient times and only after slave-labor and grandiose self-adoration jump-started civilization could we begin to tinker with guaranteeing individual human rights to the sop pushing the boulder?