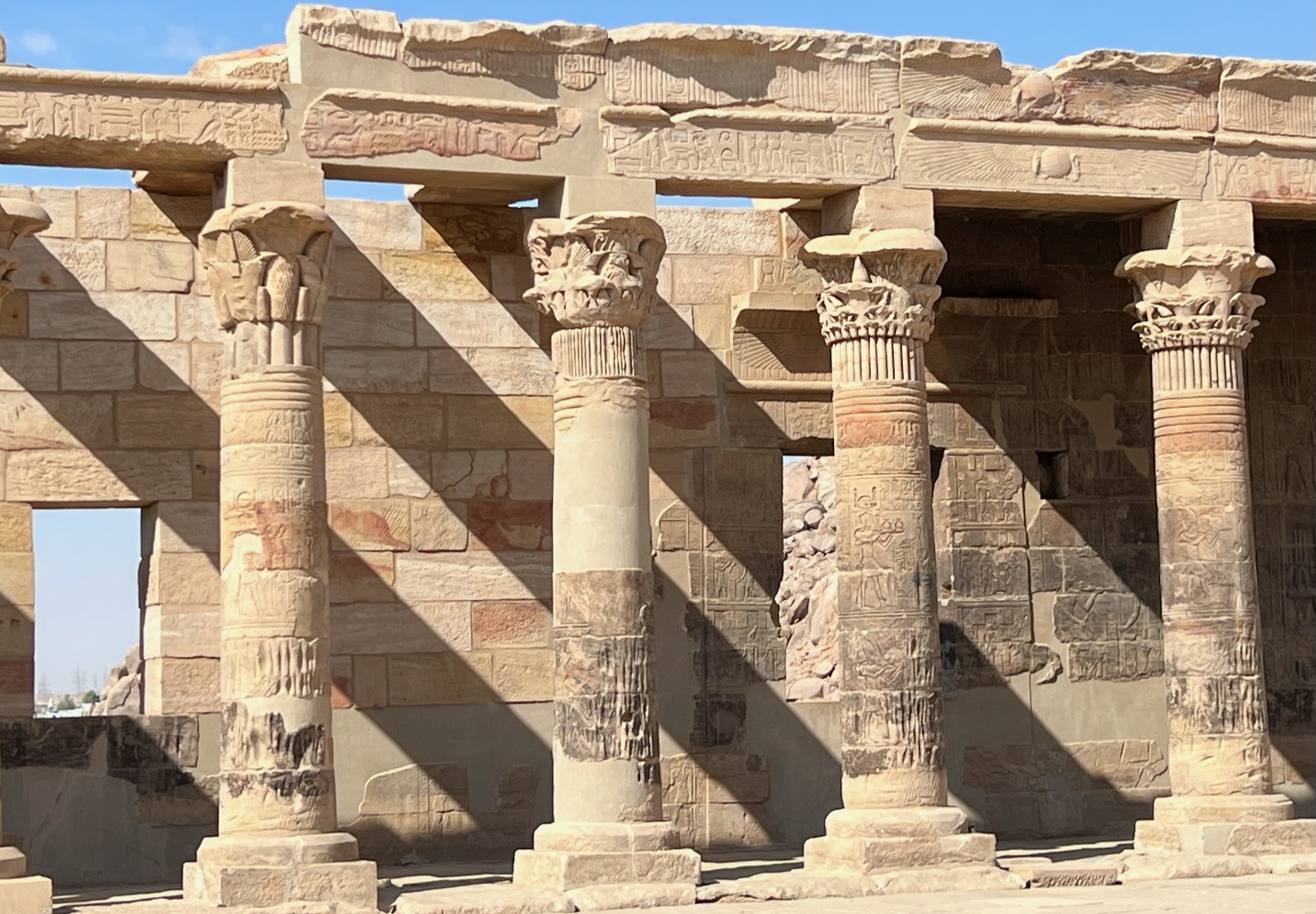 The incredible multi-thousand year old history and monuments of pharaonic Egypt draw nearly 12 million visitors a year. But I’m getting really fascinated by the much later periods, when first the Greeks, then the Romans, then ultimately Muslims took control of the empire.

The basic pantheon of Egyptian gods existed from about 5000 years ago, about a dozen deities that explained creation, the difference between good and evil and the afterlife associated with each. But with time the collection of gods increased substantially, and with it the elaborate tombs and monuments and ceremonies that created a civilization that became encapsulated in myth and held stable by fierce ideology.

As Egyptian civilization declined neighboring powers swept in and took control. First was Greece in 332 BC. Rome defeated Cleopatra and Marc Antony to take control in 30 AD. Rome was defeated in the mid 7th century by the Rashidun muslims.

Both the Greeks and Romans were advanced civilizations when they rolled down the Nile. They both had a very complex pantheon of gods of their own. But in both cases instead of imposing their own religious doctrine on the new Egyptian vassals, they respected the existing pantheon of gods and actually integrated them into their own beliefs.

The fantastic monuments on Philale Island outside Aswan where we toured this morning demonstrate this beautifully.

The basic temple was started by the second to the last Egyptian pharaoh, Nectanebo I, around 380 BC and continued by his successor. It was a temple to the major goddess Isis, and depicts in lavish detail the creation story, her immaculate conception of the great deity, Horus, and a bunch of other “very basic” religious stories.

Nectanebo’s 13th and last Egyptian Dynasty was wiped out by the Greeks about a half century later. The Philale complex of temples and other monuments was likely not completed when the Greeks began absorbing the Egyptians into their younger, more vital empire.

So what did the Greek emperor, Ptolemy I, do about this unfinished business? He completed the temple of Isis! The Egyptian story wasn’t changed at all!

Now you can tell some continuity was lost. The symmetry is screwed up a bit, probably reflecting a sometimes turbulent transition from one collection of rulers and priests to another. (Compared to any earlier Egyptian temple, though, it’s downright embarrassing.)

Now we are ill-suited to explain what really happened. We’re accustomed to conceiving something to do, organizing then outfitting it, and then doing it all in a flash. In the 4th century BC a running horse was a hypersonic rocket ship. The Greek employees organizing the new government immigrated for a life time to Egypt. They, in fact, became Egyptian.

Ptolemy wanted in fact to move the Greek capital to the city he founded when ending Persian ambitions in Egypt, Alexandria. That didn’t happen – it remained in Athens – but for a long while Alexandria rivaled Athens among the Greeks for its wealth and cache.

Did Ptolemy also believe the “true religion” was the Egyptian one, just as the “best city” was Alexandria? Whatever his disposition, Greek mythology quickly incorporated many of the ancient Egyptian gods.

Now the same thing happened all over again when Octavia, the first Augustus Caesar, deposed the Greeks!

Not quite as elaborately, though. By this time in history lots of people everywhere were rethinking all matters of religion. The Romans were dealing with the Mamluks and the Jews and all sorts of threatening religious celebrities like Jesus. So what’s notable in the Roman takeover is that they didn’t change or alter any of the Egyptian gods.

Listen I’ve got to jump to some conclusion about this. I’ve run out of time for a Ph.D. So crucify me if you must but frankly I think the top guys, Necto, Ptolemy and good ole Augustus all knew quite well that all the religious myths were bunk.

They were very, very important myths for the millions of subjects who both feared and worshiped them but myths nonetheless, and a myth that had held the societies together for so long that it had to be not just sustained but nurtured.

It’s a quick jump from that to realizing that most of the Middle Ages Popes had no real belief in a divinity. They just understand the ways of a cult, and that this was the way to create an orderly society.

Our problem in a high-tech, capable of self-destructing world is that we still perpetuate such myths. Our current wonderful obsession with truth ands falsehood needs to move up a ladder: We have to shed our destructive myths. Let’s see how many Republicans are capable of doing so next week.