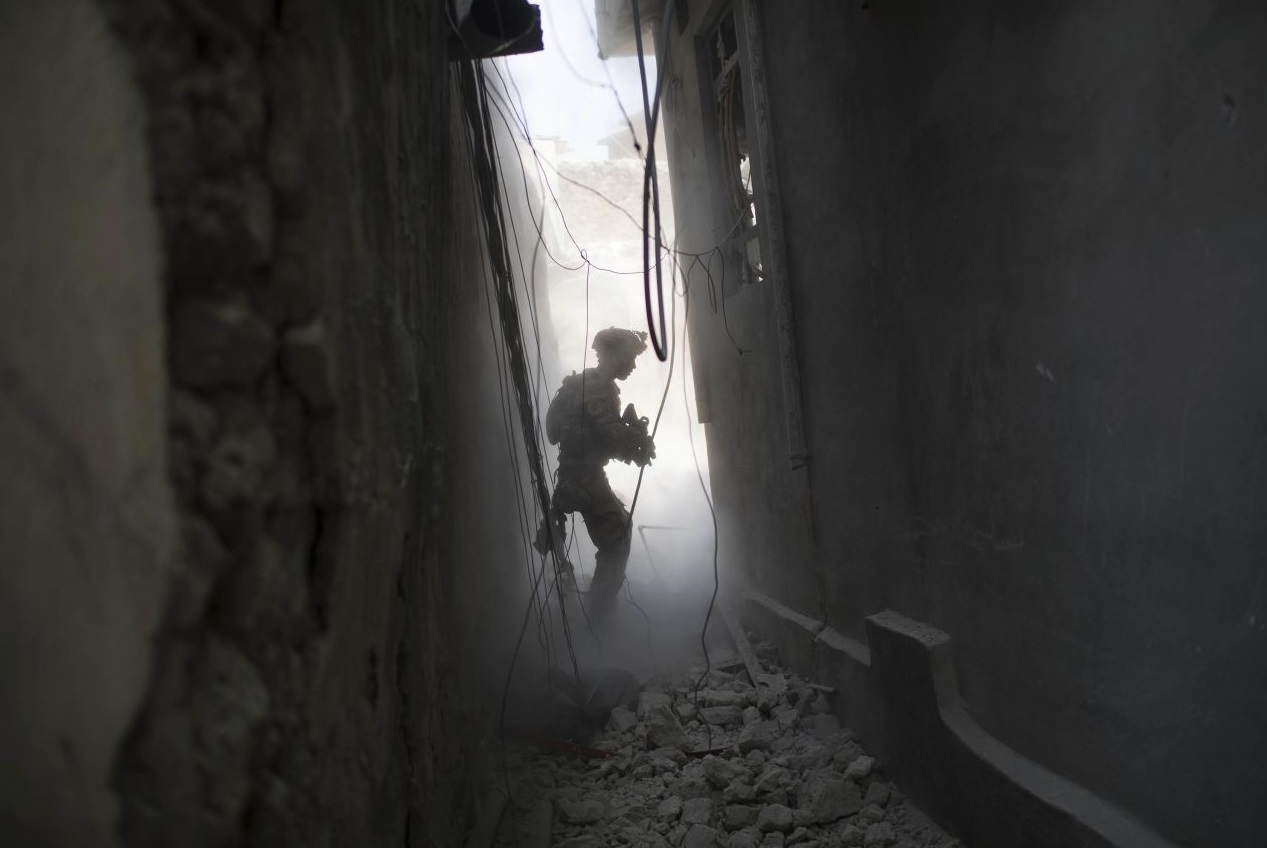 Three soldiers — all very young – like stick men in a video game strutting awkwardly across an intersection at the very far end of a very long, dark street. Too far to hear their boots on the lose rocks. But the shrill shouts of very young children displace their cadence, and they lift their TAR-21s to hip level and face the sounds of the screaming children.

It just so happens that the kids are between me and the soldiers. I’m in the line of fire.

That will forever be my lasting impression of Israel:

Privileged kids in their early twenties dressed up in the most advanced military fatigues so scared of 8-year old Palestinians in tattered clothing that they end up shooting them more often than you’d like to know. And those Palestinian children whose concept of history and politics is smothered in sickness and poverty throw stones at the world’ most sophisticated killing machines as one of the few games they know.

There are no playgrounds in Palestinian refugee camps.

And down the street under the overcast early night sky sits our tourist bus watching it all unfold as if we’re all a part of some surreal xBox game.

After an initial day of very standard Biblical site touring in Jerusalem, we had three intense days with an exceptional Palestinian guide who showed us how the tensions of thousands of years have worsened day by day for the last 3,000 years until you wonder how the hell this whole place hasn’t just been blown to smithereens.

And if you’re a Jew, or an American supporter of Israel, or a humanist who believes in workable democracy, your guilt is palpable. Those three types of persons are for the moment prevailing here, and that’s good. But they prevail because of a lot of bad things they do to their adversaries, just as their adversaries have done to them in the past and vow to do to them in the future.

The tribalism is ridiculous. The risk of thinking anything good of the other tribe is profoundly demonstrated by the horrors of the past, from God’s instruction to Abraham to murder his son… to the holocaust. There aren’t a lot of gently blowing fields of lilies in the Levant.

Several people in the group can’t take it, any longer. They leave early for a more relaxing, comfortable day in Tel Aviv and I can’t blame them. But most of the group stays in tact, despite the anguish of learning about one atrocity in the time of Herod to the millionth thousandth atrocity today when another Israeli settlement is built in violation of UN law.

The litany of human tortures by one human group on another for so many thousands of years in this area is truly enervating. And the irony that religious pilgrims to the area are inspired and joyful is the stick that breaks my camel’s back.

The hallucinogenic religious myths of Christians, Jews, Muslims and who knows what other sects totally obscures the actual realities of history, likely intentionally. And remember, the vast majority of tourists to Israel, maybe 90%, are religious pilgrims not historical geeks like us.

But as small a minority as we may be, we are the ones to see the reality of this really ugly world. We see first-hand the horrors of the Israeli/Palestinian conflict, which by historical standards is insignificant when compared to the Hebrew/Roman conflict or the British/Arabia conflict or any of a dozen other longer eras of exacerbated tribal war that has defined this area of the world for the last 2-3,000 years.

So what do you do? Israel is a beacon of hope to any free-thinking libertarian. But Israeli kids are blind surrogates to an insufferable ideology that might makes right. Ancient concepts of revenge displace any attempts at compassion.

It’s not easy to understand how political policy effects the individual. Pat phrases that this or that policy is most damaging to “the poorest” or the “least privileged” doesn’t convince us privileged any longer that small personal sacrifices are worth a contribution to mankind. We have become so wrapped up in our own self-preservation that love of neighbor is a Dead Sea myth.

And so we’ll continue to give Israel 30 times the aid, cash and military that we give its less-like-us neighbors. Israel is more like us. Doesn’t matter that there’s a lot about both of us that isn’t very nice.