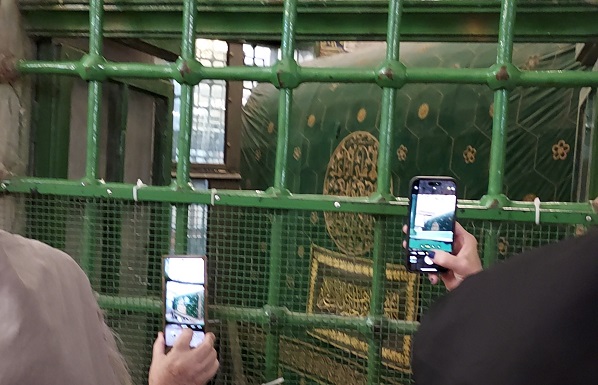 The “Great Wall,” the rapturing at the Church of the Nativity, an intimate private lunch with a Palestinian family — so much, today, but one of the most telling was our visit to the Tomb of the Patriarchs in Hebron.

Considered a sacred site in both Judaism and Islam for the same reason, the ability of believers to worship here is now “absurdly” controlled by Israel.

Israel has valid security concerns since at least 67 Jewish worshipers were gunned down here in 1929 on rumors that Jewish militias were going to take over the Temple Mount.

But 85 years later a single Jewish gunmen walked into this mosque and gunned down 29 Arab worshipers in a much delayed retribution. So at this point both sides have security concerns.

Today the half-mosque/half-synagogue is built exactly over the “Tomb of the Patriarchs and Matriarchs,” what religious and not archaeological scholars believe is the burial place of Abraham, Jacob and Isaac, the patriarchs of both Judaism and Islam. The three tombs of the wives, Sarah, Leah and Rebecca, are set just behind their husbands.

In fact this is the oldest holy site for both religions dating back 4,000 years.

Understandable you would be interested in visiting it, especially if you felt it were a holy part of your spiritual orientation.

But how can this possibly be done when the two sides with equal spiritual claims are at each other’s throats?

Simple by Israeli standards: Build a wall directly down the middle with a little donnut hole in the center that allows for the full view of the representative tombs theoretically perfectly positioned above the real tombs in the cave much further below.

The Israeli side, the synagogue side, has a slight advantage in that the surrounding glass is bullet-proof.

Just regular glass for the Palestinians covered by some green wire and green cross-hatched piping.

We as tourists get to visit both sides. Our guide, a Palestinian, takes us through the mosque-side first. We remove our shoes, accept scarves and garments necessary as several of the women forgot their head coverings, and we step into the placid room. There are only a few people inside besides us, mostly mosque attendants.

Our guide takes us over to the 1700-year old Byzantine pulpit with its beautiful interlocking wood tiles and then escorts us to the area with the non-bullet proof glass so that we can take pictures through the green wire and piping of the representative tombs.

He then escorts us out of the mosque and into a check-point. He can’t continue, so we go alone passed Israeli soldiers who quiz our intentions and religious orientation before warmly sending us back up the building we just left, but on the opposite side. We don’t remove our shoes but there are garments for those in need to cover their head just as in the mosque.

We step into a vibrant world of noise and colors, a series of several rooms filled with men and women praying, others conversing happily, several children running around and several soldiers now unarmed preparing for some deep ritual by first binding their arms with black ribbon.

Unlike on the Muslim side, as religiously neutral tourists we are not welcomed to get close enough to view the tombs. But we got the idea.

My personal feelings about all this definitely put aside, what is “absurd” about all this is that “oldest” and “holiest” are pretty close to the first principals of any religion, so in this vein Jews and Muslims are the same. Why do you have to separate individuals who are revering the same thing? If they were all together, looking through the same glass, they wouldn’t hurt one another without hurting themselves.

But something happened in the ensuing 4,000 years. Branching out from those first principals through a thousand generations the brother/sister worshipers became pinnacle enemies.

There are several meaningful conclusions and analogies from this. The first is that shared fundamental beliefs can lead to diametrically opposed conclusions. Flipping the telescope: radically different beliefs can share a common genesis.

Consider them simultaneously and they cancel each other out.

Fundamentally to me it means you better not base your EPA regulations on a 4,000-year, unsubstantiated grave.

I’m beginning to see the problems in the Middle East, if not the world or of our own households, as stemming from an inability to share the past, however unsubstantiated it may be. And that inability is generally enforced by religion or strong ideologies. The ideologue cherishes the faith in their narrative to such an absurd extant that they deny the narrative of their adversary, which is their own narrative!

I think it might have been better if on the seventh day God delayed his rest and spent a little bit more time on logic.