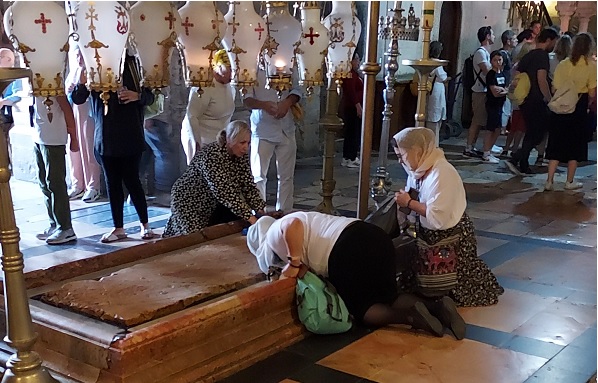 The easiest question of the day: ‘Where’s the center of the earth?’ Certain Christian sects believe it’s the Temple Mount; Jews believe it’s Golgotha; and the always necessarily compromising Palestinians simply draw a line between the two assumed centers and declared the half-point the real middle which conveniently falls in the middle of the Church of the Sepulcher.

So that’s the easy part. So glad we finally figured that out since it’s been bugging me for such a long time.

So now let’s move on. Who owns Jerusalem? Who does Jerusalem belong to, really?

There are three thousand years of conflicting answers. The rulers are confirmed history: Canaanites, prehistoric Jews, Persians, Romans, Crusaders of the Papal States, Malmuks and assorted others until the 15th Century when the Turks took control for four centuries.

However the Turks were the weakest of the rulers and under their titulary control three powerful Palestinian families began to define what was then known as Transjordan, as Palestine.

Then in the 1870s there was an ideological resurgence of geographical Judaism, Zionism. Jews in Yemen, Poland and Russia were coming under increased oppression, and the Zionists organized two major waves of emigration to Palestine.

Steeped in the youthful, contemporary embrace of Marxism/Leninism their mission was to undertake a Bolshevik revolution in the Levant.

Meanwhile Europe was heating up and the Jews were made scapegoats in a number of European countries, most notably Britain. There the great anti-Semitic foreign secretary, Lord Arthur Balfour wrote to the only British Lord who was Jewish, Baron Walter Rothschild, inviting him to support a British government goal to make Palestine a Jewish state.

It was supposed to be kept secret. But the British had a habit before World War I of not keeping secrets, and as World War I raged, the cat was out of the bag.

The new-found alliance between Britain and the Zionists was key to the British defeating the Turks in World War I. Excellent intelligence from locals much less some actual military assistance from the Zionists led to the defeat of the Turks ending four centuries of their rule in Palestine.

But the Brits who discarded commitments as easily as leaked secrets decided instead to accept a League of Nations mandate that they rule Palestine, not the Jewish community residing there.

Soon – or I suppose I should rather say as was always the case – everyone was fighting everyone else in the Levant.

There’s all sorts of evidence – mythological, archaeological, geological to support the premise that Jerusalem is the oldest continuously populated city on earth. Its natural water springs have never run out.

Laden with a bunch of unique creation myths, religious ideologues have never given up their exclusive rights to ownership either.

Today we pushed and shoved our way to most of Jerusalem’s holy sites, through groups of Orthodox Jews and Greeks, through a big group of Korean Christians, passed Armenians and Ethiopians and every one it seemed acted as the Big Honcho, the owner, lavishly if arrogantly tolerating the rest of us.

Symbolism is important, but the frightening thing is that I think it fair to say most of these people really believe their myths. I stood frozen as a young Jew at the wall celebrated his bar mitzfah, surrounded by legions of family singing and clapping. I was spellbound by a weeping Greek presbyter who sucked in his tears long enough to sing a beautiful dirge with an outstanding resonant voice in the Church of the Sepulchre, his parisioners surrounding him like a newborn babe.

After wondering if I had truly watched a young American couple (newly weds?) prostrate before the impossibly presumed boulder from the tomb of Christ to kiss it, I hastened back only to see an Italian grandfather instructing his grandchildren on how to kiss the rock for their salvation. I guess it needn’t be a prolonged kiss if you don’t need much salvation.

There is no dissimulation in these actions. They are all actions of extraordinary belief. The laughing, singing, clapping and crying were not staged. But these raptures without much instruction become actions of deep divide, and not long thereafter, war.

So it has been for Jerusalem’s five thousand years, so it will be until Jerusalem itself in mind and body ends.

Is one right and all the others wrong? You can’t hedge questions about Jesus’ resurrection or Mohamed’s spinning through time though remarkably millions try. The logic of the symbolism to belief mandates exclusivity.

Yet the question of who’s right is as myopically framed as its context: No, none of them are right. They are all wrong and until that is widely understood, and these worshipers pivot their psyche towards unselfish empathy of fellow humans away from their cartoon histories, there will be war.