Skip to content
Outstanding local guides complemented my own very personal commentary as we began city touring in Joburg and Cape Town.

An increasing number of black Americans are traveling to South Africa specifically to visit Joburg and its surroundings. But many white Americans continue to see Joburg as unsafe. They’re very wrong.

Safety is an issue I discuss frequently with clients and write about in this blog, and it’s an issue which unfortunately is often different from the more important factor, which is the perception of safety.

Joburg definitely earned a bum rap shortly after the end of apartheid as local officials really neglected the city. This was compounded by an incredible influx of African immigrants from around the continent, who with the end of apartheid saw enormous opportunities in black Africa’s most prosperous country.

Crime surged, although by the numbers it never exceeded several American cities in all sorts of important categories like burglaries and homicides. But the point was that Joburg had been a very safe and peaceful city, because the police had been so brutal under apartheid.

When the cap was snapped off, compounded by a new republic’s struggle to allocate precious resources and a huge influx of African immigrants, Joburg sank into a veritable mess.

It’s emerged. Our outstanding local guide, Peter Mashaba, took us Saturday into the center of the city. It’s bustling and active although I would be remiss if I didn’t confirm that it isn’t as sparkling and inviting as when I had a shared office in downtown Joburg for several years in the 90s.

But it’s much better than it was only a decade ago, and it’s infinitely better than the perception that many of my clients have.

Our touring took us to Mandela’s posh home in Joburg where the faithful have stacked small stones with inscriptions on two cairns just outside his wall. We also drove by the international headquarters of Anglo-American which has been relocated into the center of the city.

Other large corporations are following suit, including SAB Miller and Rennies. We saw in the deep center of the city where two new hotels were being built.

Although my tour scheduled three nights in Cape Town most of my guests this time have booked five, and I’m filling every moment.


Sunday was with one of my favorite guides in the world, the lovely Dot Malan, who I think knows more about Kirstenbosch Gardens than any person alive. We got an intense tour of several important parts of the gardens.

Today we went up Table Mountain. It was a spectacularly beautiful day and about a third of the group undertook the whole hiking route at the top! In the afternoon I took them on my historic walk through the Company’s Garden stopping to visit an outstanding exhibit by South African artist Penny Siopsis and for a short time touring Slave Lodge.

I have some avid shoppers in this group. They warned me! But the time in gardens and museums they felt so valuable, they canceled the Green Market Square flea market!

Finally, several of us ended a fantastic day – where else? – but at afternoon tea at the iconic Mt. Nelson Hotel.

Any big city can provide attractions to easily fill a week of touring, and I always feel that we’ve never done enough. I worry, too, that I might be pushing my folks too hard. But so far, anyway, the feedback from this group is … fabulous! What’s next? 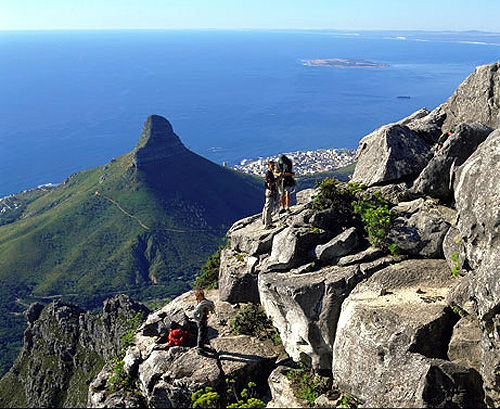