Skip to content
We spent the day in Cape Town’s District Six, learning of some very heavy history, eating some fine local food and applauding the country’s transformation.

Around 60,000 people were relocated out of District Six under apartheid’s gruesome Group Areas Act, from 1966 – 1974. One of those persons was our guide, Linda Fortune, author and advocate for the District Six Museum.

Altogether more than 3½ million people were forcibly removed from their homes throughout the country during that period, but what makes District Six so important historically is that it was probably the most multi-cultural, multi-ethnic area in the country. 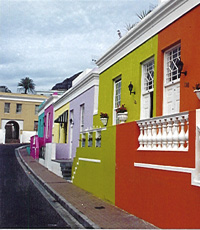 Begun by the Batavian slaves brought to the colony in the 17th Century, District Six had grown into an “old part” of Cape Town with a rich, rainbow heritage. In an area hardly more than 2 sq. miles, virtually every religion on earth had a house of worship, and virtually all of the 11 race classes proscribed by apartheid had been living an integrated life for generations.

So the breakup of District Six is one of the best examples of apartheid’s sinister mechanisms.

Linda’s story, like all the varied guides I’ve enjoyed having from the museum, was an incredibly melancholy one. Today the residents have reclaimed their land, but it will be a long time before the promised reconstruction of what had been bulldozed down will be completed by the government.

Today the district which has just begun rebuilding is vibrant and … colorful. BoKaap merges with District Six and the primary color architecture of BoKaap brings a smile to every face!


And smiles galore to our tummies, too! We had a special Cape Malay meal prepared by Joey and Nazli of BoKaap Kumbuis. Joey gave us a history of Cape cuisine, which he calls a cuisine franca.

We also had time to visit Streetwires! This is one of my favorite artisan coops in Cape Town, where 55 young artists are trained to create the most imaginative objects from near full-size Volkswagon beatles to every animal on the African veld … all from wire and beads!

Tomorrow we head to Cape Point. Fortunately the fires are out, the park is completely open and even today the spectacular Chapman’s Peak opened as well!