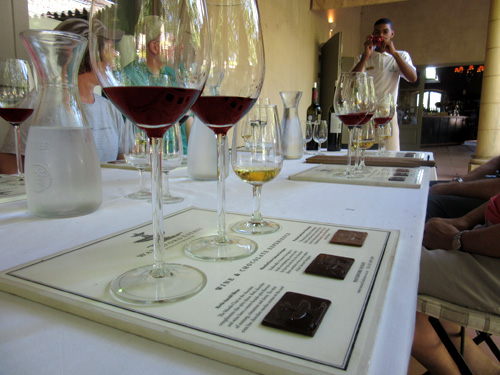 After a day at Cape Point we ended our Cape experience in the wine country near Stellenbosch.

Dogged by unprecedented fires, our touring was only slightly interrupted as part of Table Mountain Park at Cape Point was closed. But the Cape of Good Hope, the Flying Dutchman to the Cape Point and our choice picnic spot at Buffelsfontein were unaffected.


Yet the damage was visible everywhere, from the sometimes heavy haze of distant hillsides still smouldering to the distinctive smell of ash.

An entire mountainside at Hout Bay was scorched.

I love our specially prepared South African picnics, which overflow with enormous varieties of foods and sweets, and I don’t think I’m exaggerating when I say most of my clients think the South African brownie is better!

The African penguin was toddling around in full force at Boulders, on our way from the Cape into wine country. Considered pests by many of the local residents, SANI Parks has created a marvelous sanctuary for them virtually in Simon’s Town, taking the pressure off many private residences.


There is so much more to the wine country than wine. We began the day at Eagle Encounters, a private rescue and rehabilitation center principally for birds, but Alan also discovered some things they take care of that don’t fly!

We’re staying for two nights at the Lanzerac, one of my favorite wine estates for accommodation. The grand rooms are furnished with Boer-style furniture, including some priceless antiques.

Lanzerac wines are excellent, and everyone enjoyed tastings and a cellar tour. We also visited the Tokara vineyard, currently famous for its brash blend of Spanish and traditional French grapes. The day ended perfectly with a chocolate and wine paring at the Waterford estate.

The heart is Stellenbosch, the heart of Boer culture and history. We toured the Stellenbosch museum and its four beautifully restored old homes. There was time to browse the city’s many shops.

Now, one day in Joburg before our venture into Botswana!