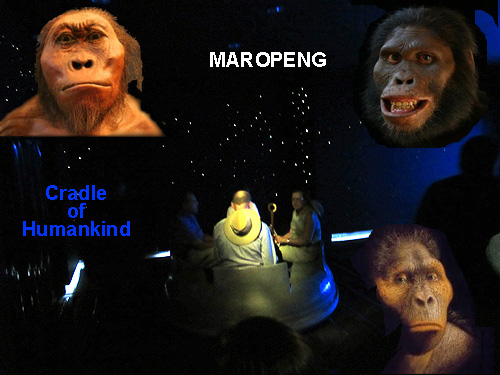 On our last day in South Africa we toured mankind’s first.

Or some of his first, anyway.

The Lanzerac was kind enough to give us an early breakfast so that we could leave at 7 a.m. It’s always such a crapshoot in South Africa when traveling around the cities during the week, because of traffic. Their highways are modern, but far too small for the concentrated traffic of rush hour.

We were fortunate. Sometimes from Stellenbosch it can take 90 minutes. We made it in 45, checked in to Mango Airlines and were on our way to Lanseira, the smaller municipal airport on the far northwestern side of Joburg.

That meant we were only 30 minutes from Maropeng, translated: Origins. This World Heritage Site includes the Maropeng center and early man museum, and ten minutes away by car, the Sterkfontein caves.

It shot to prominence 15 years ago when the American, Ron Clark, found “Little Foot,” only the third nearly complete skeleton of an early man, in this case, an Australopithecus Africanus.

So the South Africans sprang for something akin to a mini theme park.

After a brief introduction and circular time line that you walk through, depicting the stages of Planet Earth’s long trajectory to life, there is a short video about the early geological forces that formed the planet.

Then it’s to the “boat ride,” a simulation through time that somewhat parallels the deep river caves in which so many precious early fossils have been found in the region.

And this emerges into a decent museum about early man, and contemporary man.

The several-hour visit cave some meaning to what would otherwise have been just a travel day, something when combining South Africa with Botswana is unavoidable.

And so we end our last day in South Africa back at the lovely Michelangelo in Sandton. Tomorrow, to Botswana!