Skip to content
Jutting mountains, horizons to the end of the earth, really rare and beautiful game and lodging at one of the most luxurious, remote lodges on earth. That’s Samburu Saruni.

In two days we’ve seen reticulated giraffe, gerenuk, elephant, lion, a leopard kill (without the leopard, we were just minutes late) and are enjoying some of the most expansive vistas Africa can provide. 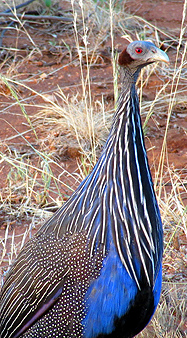 After yesterday’s wonderful drive around Mt. Kenya (which hasn’t once seemed to disappear from the skyline) we pulled past Isiolo and even Archer’s Post and continued on the desolate desert road north.

But not for long. Within a half hour we’d turned into the private Kalama Conservancy, a community based reserve that adjoins Samburu National Park. Eight villas are built on a steep mountain about a thousand feet above the mojave like desert of this incredible Northern Frontier.

Our first game drive within the conservancy found elephant and the reticulated giraffe, found only in these northern areas. It’s a beautiful, more colorful giraffe than the common one found most everywhere else, with additional horns and darker, very articulated markings.


Gerenuk were everywhere. That’s the weird long-necked antelope with an ET-head and giant ears.

Last night we went to bed under a starlit sky with a full moon that laid on the enormous landscape like a silk veil. Hyaena swooned and nightjars piped all night long. In the morning genet cats joined us in our individual villas to share the chocolate cookies of early morning tea.

Then this morning we left at 6 a.m. in the dark but with the full moon still radiant above, Jupiter just below it, Mars and Venus also visible. We encountered many elephant and giraffe as we entered Samburu National Park.

We set up breakfast on the river shore and watched two lionesses on the opposite bank, obviously irritated with an unsuccessful night of hunting. Honey badger tracks were all over our sandy knoll.

Under the towering doum palms at riverside we increased our bird sightings to the highest level I’ve ever achieved on a safari of this length so far: just under 400 species. Today we added the palm nut vulture, rosy-patched shrike, magpie starling and white-headed mousebird among many others. We saw lots more of the remarkable vulturine guinea fowl.

But the most amazing bird sighting of all was our own North American Northern Wheatear, a small thrush like bird that makes the longest migration on earth, even greater than the arctic tern. Some of the birds migrate 30000 km per year, from North America via Asia to here in Samburu. Their migration is so long that they spend more time migrating than in either their breeding or wintering grounds.

There are many luxury lodges in Kenya, but few this remote. It’s an outstanding place with incredible rooms, outstanding food and drink and a remarkable staff.

I am singularly impressed, in fact, with the Samburu staff. Their knowledge of the area is unmatched, of course, but who would have suspected the guides would know the Latin names of birds?

I was astounded to learn that all of them had rarely left this place, and that their entire education was from government schools in the area. Frankly, I think several of them would be better managers than the white faces that owners feel compelled to provide as a welcome.

The current South African couple (actually a Californian who married a South African) is incredibly nice, but they don’t know the language or Kenya. They’ve been here for less than a month having come from a presumably successful stint running a dive resort in Malaysia.

So I hold nothing against this wonderful couple. But it’s time Kenyan lodge owners understand that Kenyans, not wazungu, should manage their properties.