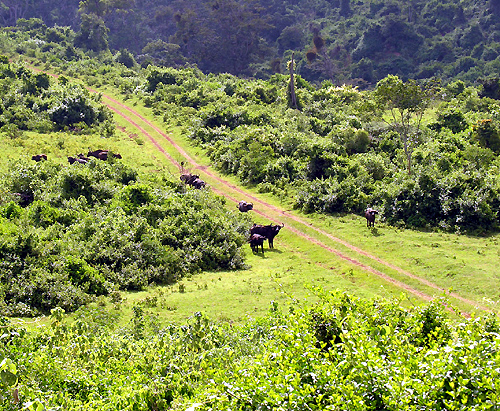 Absolutely Kenya’s greatest attraction is how different one day can be from the other. In all my 40 years guiding, no place changes so radically. It’s magic:

After a week in hot, humid semi-arid bushveld bingo!: we’re in the frost of a precious highland rain forest! Astounding.

Our last two days were in a spectacular jungle but a cold one among rare monkeys and dinosaur-like birds.

The drive from Nairobi was an eye-opener. Veterans to Kenya in the last ten years would not recognize how massive Nairobi has become or how modern its transportation system now is: Six lanes of super highway took us out of the city.Practically every kilometer along the way featured skyrocketing apartment buildings, malls and the still present ramshackle duka. It’s a scene of development hard to comprehend.

Our first day was at the Aberdare Country Club, sister hotel to The Ark tree hotel. I was sincerely impressed by them both. Despite the depressed tourism Kenya has suffered these last 6-8 years, the owners have refurbished both places with new, modern bathrooms and better furnishings.

The country club is situated on one of the most beautiful sites in Kenya, high in the mountains with grand views everywhere. Massive amounts of bougainvilleas and other flowering trees attract dozens of sunbirds and giant mountain birds like the turaco and silvery-cheeked hornbill.

The grounds are teaming with slightly tamed game. Warthog, bushbuck, eland, baboon and colobus monkey lounge on the gorgeous grounds or simply come walking down your pathway!

Jim Pease, Shirley Gangwere and Kakkie Cunningham went horseback riding, and this was no ordinary ride! They trotted among giraffe and zebra!

The second day we went deep into the park and enjoyed a picnic lunch beside Chania waterfalls at around 11,000′. There was a lot of huffing and puffing getting down and then up from the waterfalls at that altitude, but it was worth it! The scenery was fabulous and a variety of unusual plants filled the forest.

On the way back I saw a track I didn’t recognize, so … well, we took it. We passed several beautiful little salt pans, each one surrounded by buffalo. We saw elephant and bushbuck as well, and once again this wonderful birding group found some special species like the alpine chat and mountain iladopsis.

The Ark has been made much more comfortable than when I was last here 5 years ago. Rooms are bigger, bathrooms are modern and the beds new. But the waterhole hasn’t changed, and we watched giant forest hog fend off hyaena and elephant families fight one another for the precious salt.

The full moon shown over Mt. Kenya and reflected onto The Ark’s pool. It was idyllic beyond belief.

Now, on to Samburu!