Our six days on Kenya’s Southern Circuit were fabulous, and especially for birders, and believe it or not the entire group are avid birders!

We started in Amboseli at the lovely Tortilis Camp, one of the most established and famous camps in Kenya. The weather was beautiful for this hiatus between Kenya’s two rainy seasons: cool, usually misty and often overcast, but enough moments of complete clearness that we got some incredible views of Mt. Kilimanjaro!

Amboseli is known for its elephants and it didn’t let us down: we must have seen a total of over 250 at the end of the two days of game viewing. We also got our first cheetah, a huge and magnificent male not far from camp.

But what kept us out on game drives for a much longer time than normal were the birds. This is an exclusively great moment in the year, when southern migrants and northern migrants all converge for all of a month or less.

Combined with the outstanding resident birds we were netting more than 45 species each game drive! Whydah had their ridiculous full tales, grey crowned crane were courting, the early nesting weavers and finches were all over the place … but perhaps the most awesome spectacle were the (dare I say?) millions of Eurasian barn swallows whose flocking nearly blocked out the resident flamingo.

We saw really unusual stuff, too, like the Temnick’s Stint and Purple Heron. 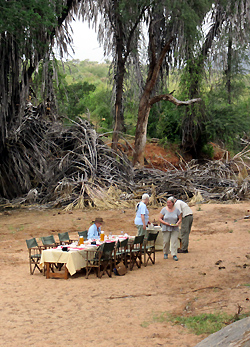 We saw hartebeest, zebra, and once again some fabulous birds, including the Eurasian Sparrowhawk. Everywhere – literally everywhere – were the spectacular rollers, both the resident lilac-breasted and the gently beautiful Eurasian.

We spent three days in Tsavo East, a very wild and rugged bushveld. We found two leopards, zebra, giraffe, buffalo and lots of impala and kudu and dik dik. And for us birders perhaps the most spectacular two finds so far: the golden breasted starling and southern Africa’s carmine bee-eater.

We saw both those exceptionally beautiful birds on the same game drive, an outstanding perhaps never-to-be-repeated experience.

In Tsavo East we stayed at Galdessa Camp right along the Galana river. You could relax on your verandah and watch the hippo and croc.

It was a great southern circuit! So how do we celebrate? With a Pim’s Number One Cup at the restored colonial bar at the Stanley Hotel! Thanks to Brian and Caroline Barrett, our UK contingent, for introducing us to this celebratory safari drink!

On to the north! Stay tuned.