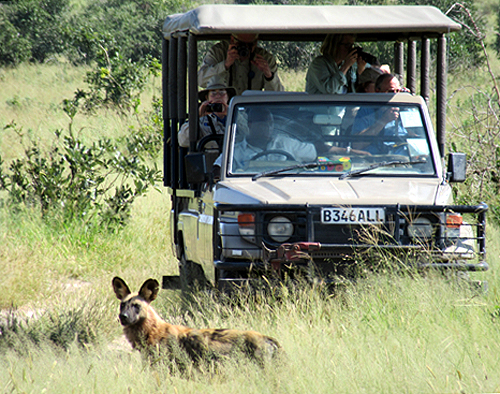 The great prize on safari today is to see wild dogs. We saw them twice, once in Moremi and once in Savute.

We watched them hunt – and miss a reedbuck – in Moremi. In Savute we came upon them about a half hour after they had killed a young kudu. They were in a pond flooding their already distended bellies with water.

At first we thought they must have killed an impala, because the alpha female had serious puncture wounds in her face. But we learned from a film crew that was following them that the impala kill had been several days ago.

The story of today’s hunt was fascinating; the film crew lucked out and got it all:

The dogs spotted a kudu family about 400 yards from them and raced through the cover of tall grass. But another predator had also spotted the kudu: a leopard.

When the dog sensed the leopard, a few of them began popping up above the grass until the leopard recognized them and gave way, finally running up a distant tree. Even the largest leopard is no match for a pack of wild dogs.

The kudu, of course, had also seen the dog jumping, but some of the pack had been dispatched to surround the suddenly alert kudu.

All of this happened very quickly. The actual attack started only moments after the leopard fled. It was a large family of kudu and the dog quickly out ran and surrounded the youngest. Although almost every wild animal mother will try to defend her youngster, this doesn’t apply when wild dog are the attackers. Dog are the most gruesome and successful of the hunters.

There’s no hope for the animal once surrounded by dog.

The 9 dogs then tore the kudu apart eating it while it was still alive. According to the filmers in twelve minutes the roughly 220-pound kudu was gone.

Almost literally. When the dog tear apart their victim they will often run away with parts, so the remains of the kudu were scattered far and wide.

While we watched the dogs watering the sky began to fill with vultures. In a remarkably short time there were about 300 vultures circling above trying to focus on the kill site, but because the dogs scatter their kill, the vultures were at first confused.

Then a black kite dove into the grass and before a few moments passed vultures were landing all over the field: whitebacks, hooded, white-headed and lappet-faced.

The hunt, the take-down, the consumption and clean-up with a wild dog event is the quickest of any predation in Africa.

What an end on our final day on safari!

The Botswana trip has been fabulous. We sampled all its unique ecosystems: the Kalahari, the Delta and Moremi, and Savute.

Savute is the southern end of the massive Chobe National Park, a huge trapezoid that begins at the Zambezi River and extends more than 150 miles south towards the Delta. The vast majority of this area is incredibly arid, although heavily wooded, so there aren’t usually a lot of animals in its interior.

But along the Zambezi and where we were, on the opposite end in Savute, there is always some water and excellent grasslands. Many of these grasslands have been formed relatively recently, in the last half century for example, by the increasing numbers of elephant that destroy forests.

We saw quite a few elephants, but they were all male! Elephant behavior is changing as their densities increase and human/elephant conflict grows. It’s likely that most of these are traveling, north to south or vice versa, and Savute is a nice way station on these longer, stressful journeys between the fecund north of the country and the Delta.

Overall our game viewing these last 8 days has been fabulous. We saw nine lion and some of the group a few more. We saw a cheetah and glimpses of leopard. On our last day in the Delta, some of the group saw the rare sitatunga!

That’s a peculiar water-based antelope with webbed feet that makes a nest of reeds in the Delta.

Most of the group got gorgeous views of large families of lechwe and kudu, and of course, impala. We also saw reedbuck, steinbok and uncountable numbers of hippo often accompanied by crocs.

The group was fantastic. I don’t think anyone skipped a single game drive!

Most of the group now continues to Victoria Falls. Along with a few others, I’ll be returning home and my two months in Africa has been truly astounding. I’m so grateful to all my many clients!

See my next set of blogs where I summarize and compare the vast and many different parts of sub–Saharan Africa I’ve been so fortunate to experience again on this extended 40th guiding anniversary safari! 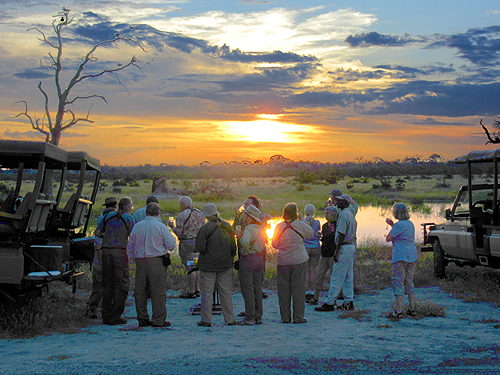