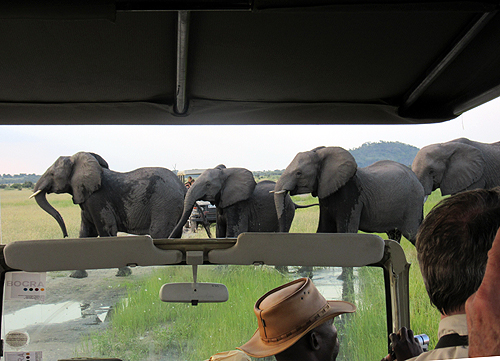 Twenty-five elephants exploded out of the forest about 400 meters away from us and cantered quickly directly at us. We were in open Landcruisers. No sides and a simple canvas top.

They stopped about half way. Not having had the time to look at the area with our binocs none of us at first realized it was a watering hole. My heart slowed down a bit. They weren’t coming at us; they were headed anxiously to water.

After light and late rains constrained by El Nino Savute has enjoyed some heavy rainfall recently. We were in an open meadow, but the grass was high and green and camouflaged the pond.

We watched them for a number of minutes as they sucked up huge amounts of water with their trunks then squirted it into their mouths, jostling for position. It was likely 3 or 4 families.

During our entire time in Botswana we hadn’t seen many elephants. At Savute we’d seen a group of about 20 scattered across a field, but they were all male! Before us now were real mixed families, although I noticed there were only a few juveniles and no babies at all in the group.

Then again out of the forest to the right exploded another group! This group had two youngsters under one year old. As they all gathered and jostled at this little watering hole I counted 67 elephant, with a couple huge bulls hanging slightly behind.

They didn’t linger drinking for very long. In fact I imagine many didn’t drink at all. As anxious as they seemed to get to the water, they now were equally anxious to leave.

Our excellent driver/guide, Metal, had briefed everyone to keep quiet. The wind was in our favor. Most elephant can’t see very well or at all after they’ve reached their teenage years, but their sense of hearing and smell are acute. Our being quiet and the fortunate direction of a strong breeze meant they probably didn’t know we were there at first, or at least that we were anything too unusual.

There were two cars from our group about 70 meters apart on the road, pretty equidistant from the watering hole.

The assembled group began moving … quickly towards us. One family immediately pulled away to the right, but the big majority of them headed straight for the space between our two cars. The group to the right then circled back behind our car, and within moments, we were encircled.

When they realized that we weren’t trees or mountains or abandoned vehicles, there was some hesitation and confusion. We could hear a loud of rumbling. Humans can hear only 10% of elephants’ normal vocalization: the remainder is below our decibel level of hearing.

The big mamas pushed the babies forward anxiously with their trunks, and younger males flapped their ears at us. One very large matriarch stopped in the road and faced us as the great line of pachyderms moved quickly passed us.

Then, with a slight step or two towards us that made all our hearts stop and a flip of her ears, away she went, too.

There was no trumpeting and no real panic … on either side! It was an absolutely splendid event for our last game drive in Botswana!

Readers of my blog know that I believe there are too many elephants in Africa, today. This is particularly true in East Africa, but even here in Botswana the evidence is mounting.

Normal elephant behavior does not include large males congregating as we saw. Those males looked like residents, animals who had settled in to their environment and made peace with what normally would be a stressful living condition.

This happened during the years of heavy poaching in Ngorongoro Crater in Tanzania. Then the big tuskers took refuge in the caldera which was a safe haven from poaching. They learned to live together and never left, even when the poaching ended.

I don’t think this group in Savute has congregated for safety from poaching. It may have something to do with climate change and the radical weather all of Africa is experiencing… or something else. But it isn’t normal elephant behavior, and whatever the explanation I think a root cause is … too many elephants for whatever unusual situations exist today.

The beautiful group that passed between our two vehicles were not residents. They were traveling as elephants have been doing for millennia. When they travel it is normal for families that would normally stay well apart from one another to congregate as we saw.

The mystery remains why of so many elephants there were only 2 babies and no juveniles. The next youngest elephant I found in the group was in his teens.

Wild Africa is a never-ending source of drama and beauty. How lucky we’ve been!