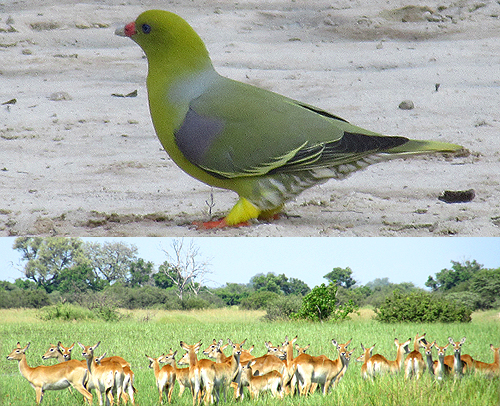 I can’t understand traveling to Botswana without visiting the Kalahari. The Kalahari is literally the heart of Botswana, the ancient home of the San People, the foundation for the Okavango Delta.

Traveling to Botswana and not visiting the Kalahari is like taking a vacation to New York City but not visiting Manhattan.

We began our Botswana safari with two fabulous days at Tau Pan in the Kalahari. The summer rains and hot temperatures were moderating. We had no rain and temperatures never got higher than the upper 80s.

The Kalahari is an enormous scrubland not really a desert. There are a variety of large bushes which provide birds, animals and the San with all sorts of food and medicines, as we learned on our “Bushman Walk.”

Around its “pans” are found the largest concentration of animals, because this is where the heavy summer rains pool. Admittedly this is not a Serengeti, but during our game drives around the 20 sq. km. Tau Pan we saw hundreds of springbok, many dozens of gemsbok, dozens of red hartebeest and wildebeest, a couple giraffe, lots of bat-eared foxes and jackals, a couple eland, some waterbuck and a few steinbok.

The birdlife was terrific and the Kalahari (northern black) Korhaan provided the most fun. It’s a spectacular bird that was breeding, which means screeching itself to death whether or not a female is around! There were also kori bustards, the second heaviest bird in the world, and numerous other colorful weavers, seed-eaters, chats and others.

One of the great highlights in coming to the Kalahari is learning about the San People. That means learning about their current political battles with the Botswana parliament for greater control of the reserve, of their successful protests of some overly patronizing lodges that want them to pretend to still live as they did before.

But also learning how they lived in the old days, because the traditional San’s manipulation of the Kalahari ecosystem is actually mind blowing. There is not a bug, root, leaf or piece of dust that traditional San did not use for some practical purpose.

What all this meant was that probably three-quarters of the things we saw and learned at Tau Pan were not available anywhere else in Botswana.

Equally unique and much more famous and popular, of course, is the Okavango Delta. We spent a half day boating deep into the Delta. In a nutshell the Delta is the Kalahari in flood! Ridiculous amounts of water gushing out of the mountains of Angola spill onto the Kalahari ecosystem which is essentially almost all of northern Botswana, and then spread out creating channels and islands.

The ground and substrata is the same as around Tau Pan, but of course with so much water a new ecosystem is formed.

We saw water antelope like the red lechwe, river otters, learned of the many grasses, reeds and papyrus that define this ever changing swampland, and saw some incredible things like the painted frog and infinitesimally small reed frog. (You can place 5 or 6 side-by-side on your thumbnail.)

Birdlife is fabulous, and we were fortunate enough to find the rare lesser jacana as well as the headliners like the malachite kingfisher and fish eagle.

In the adjacent Moremi Game Reserve we were introduced to “Big Game” and what an introduction our first morning when we encountered wild dog hunting reedbuck! What a thrill!

Moremi was where the birdlife was most spectacular, with varieties of colorful storks, bee-eaters, starlings, larks – you name it! Have you ever seen a green-capped eremomela or out-of-this-world green pigeon? We did!

Our five days here in Botswana have been breath-taking, and we’ve seen its three great ecosystems: the Kalahari, the Delta and the big game woodlands of Moremi. We’re going to cap it off with some more big game in southern Chobe starting tomorrow. 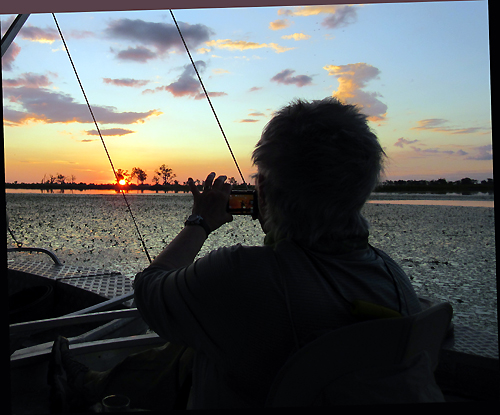