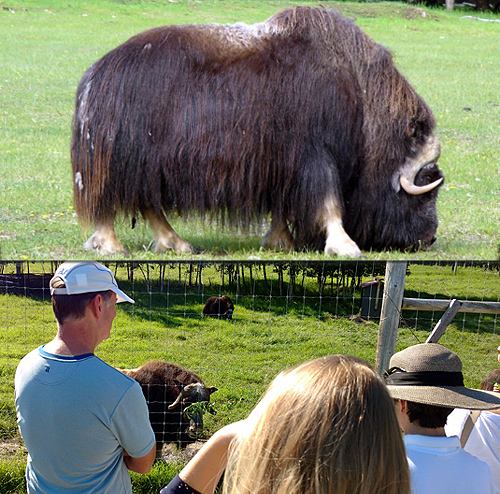 The ecology of Planet Earth’s Far North is mysterious and often perplexing, today complicated more than anywhere else by global warming. Our first full day in Fairbanks introduced us to the remarkable biology of this Far North.

I love to start in Fairbanks, and most of my clients spend a full two nights here, and quite a few, three nights. I’ve documented during my 40 years of coming here the creeping of global warming which all of sudden now seems out of control.

It’s 85 degrees F as I write this, at 3:30p Wednesday afternoon. Fairbanks’ norm is upper sixties/lower seventies. It’s been beautifully clear, frightfully sunny all morning until the afternoon skies are massively obstructed by unbelievable storms. There was a time when most of the Far North never experienced lightning.

It’s here folks, and it’s here in spades. Shops in Fairbanks don’t have air-conditioning; it just was never needed. Now every door in town is propped way open, second floors are closed down because they aren’t ventilated well enough, and the city’s old time population just doesn’t know what to do.

The ice cap and glaciers are disappearing, the coastline is eroding fast, oyster farms are dying because the water’s getting too hot and salmon seasons are all screwed up.

The roads within the University of Alaska campus are constantly being rerouted because of sink holes (they’ve had four this year), as a result of the permafrost melting.

We started at the fabulous welcome center which is ideal for my briefing and then visited the University of Alaska’s Large Animal Research Station. Here we learned of the work being done on reindeer, caribou and muskox.

Reindeer are originally Russian caribou that have been domesticated for a long time. But it was interesting learning about their differing biologies: the reindeer are much more biologically precarious, growing antlers sometimes at the rate of 2″ per day! The mystery is why, and how relatively rapid domestication produces such variance with the wild animal.

We were told the remarkable story of what may be the most interesting of the Far North animals, the muskox.

Now farmed for its exquisite qiviut wool, the muskox was probably extinct in most of the Arctic by the 1900s, probably a mixture of over hunting and disease. Today there are nearly a half million and many are farmed for their extraordinary wool, a dozen times warmer (more insulating) than sheep’s wool and softer than cashmere.

There are few animals that thrive at -40F and get sick at 50F. That’s the muskox, and needless to say may be as threatened as the polar bear by global warming.

Tomorrow we head into Denali. Unfortunately I’ll be out of wifi for several days, but please come back the beginning of next week for the continuing reports of the trip!