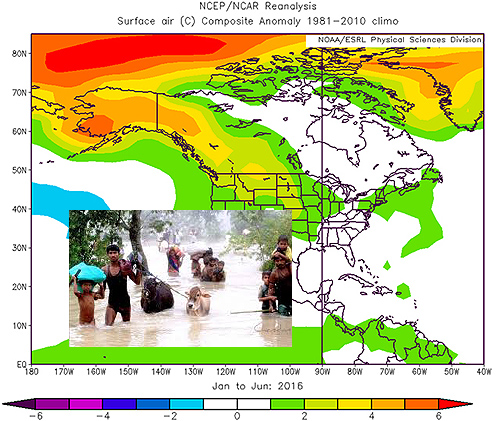 Everyone in the world but Republicans accept global warming, even now many very conservative Alaskans.

Waiting for my luggage in Fairbanks I listened to a conversation from a family member meeting a local warning him that the permafrost had melted so much during his two weeks away that they might not be able to get their truck home.

According to the Weather Channel, Fairbanks had it hottest first half of the year on record, a whomping 7 degrees above average.

“In fact, 14 of the top 15 January-June 2016 temperature anomalies were in Alaska,” the report points out.

There are those Alaskans who are spinning this to their advantage, of course. Conservatives are rather inflexible at times.

The federal government’s “U.S. Climate’s Resilience Toolkit” is in large part a Congressional concoction for doing just this. The agency points out that Alaska’s much higher temperatures have already resulted in more internal precipitation and a longer growing season.

Yet its science can’t be spun. With a 12-degree projected increase in Alaska’s far north, the additional precipitation and melt will be devastating to Alaska’s native American communities, and the government sees this as the first real threat to American lifestyles.

“These villages are particularly vulnerable to erosion and flooding impacts resulting from extreme storm events, especially those in areas that do not have the ability or resources to quickly respond or rebuild after disasters,” the agency concludes.

Another sweet-and-sour addition to the panoply of Alaskan climate changes is that fracking is now possible where it wasn’t before, and that giant cruise ships can now sail the Northwest Passage, two controversial moves that conservatives spin as good for the economy.

There has been tremendous pushback to Texas-based BlueCrest Energy’s fracking that’s just begun in the Cook Inlet. But the Obama administration has given the green light and of course Alaskan authorities couldn’t be happier.

But the four-mile long horizontal wells underneath areas of permafrost seem to be a catastrophe ready to happen. Unlike in the lower 48, though, many of these vast areas are unpopulated. Bears don’t complain of methane coming out of the kitchen faucet.

Serenity Cruises leaves Seward on August 16 for the largest tourist cruise ship ever to sail the Northwest Passage. The 32-day voyage has long been sold out, and the average price paid by the 1070 passengers is $50,000 ($20-120,000 range). There are 655 crew and almost every guest has a butler.

It won’t be the first tourist cruise to sail the passage, that was Lindblad’s Explorer in 1984, but unlike Lindblad’s 80 passengers the Serenity is a monster.

Both the Canadian and American governments have been mobilized for the voyage. Enormous federal costs have gone into preparing for disasters at sea. The Serenity’ tourist ship will be preceded by a Serenity logistic vessel that includes 6 helicopters and is designed to ensure exact navigation among icebergs, among many other potential hazards.

The “shore excursions” will feature native American communities in Alaska, Canada and Greenland before the boat docks in New York in September. There is enormous controversy as to whether these new visits by so many tourists at once and for such a short time is a good idea or not.

I’m sure that aboard Serenity’s cruise will be quite a few climate deniers, but clearly that’s their public orientation, the blatant hypocrisy of a conservative ideology propagated by people who really don’t believe it.

As I’ve often said America is in a better position than perhaps any other society to deal with climate change. Kenyan businessmen can’t quickly alter their revenue stream from a hurricane infested Bahamas to an exciting undiscovered Northwest Passage as the owners of Serenity are doing.

But there’s more to our planet than extracting profits from it. The damage to native communities and to the flora and fauna that construct our ecosystems is certain to be great and largely unpredictable.

How will Serenity play that one?