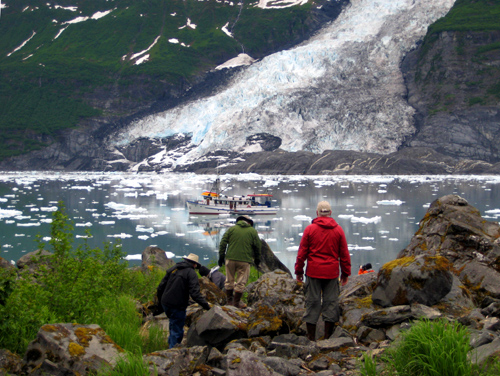 Travelers who focus on natural history usually begin in Africa (I’ll be there in a few weeks) and after one or two safaris there’s a common list of where they go next.

The Galapagos and Alaska.

I’m not sure I can explain this trilogy of interest from any natural history point of view, because the Galapagos doesn’t share any of Africa or Alaska’s common wow-factors like endless horizons of undeveloped wilderness, dangerous big animals and enormous size.

I think the reason the Galapagos ranks up there is because the way you visit it: on a cruise. Cruising brings in a whole section of the traveling public. Normally two-thirds of all visitors to Alaska stay on the big cruise ships.

For 2013 & 2014 cruise passengers to Alaska actually fell below one million to around 60% from the historical level of two-thirds. This trend will continue as Alaska develops its roads and self-driving, and as we old geezers are cycled out by the younguns.

I’m glad so many people can visit Alaska on those giant ships, because it’s often the only way they can afford to see this otherwise very expensive place. But believe me it’s not how I’ve shown people Alaska for 40 years, and frankly I can’t imagine stepping onto a cruise ship, especially the behemoths that ply into Alaska.

Alaska’s affinity with Africa comes only when you get into its interior, or into the nooks and crannies of the coast that a big ship can’t dare navigate.

That’s what we’ll do on the trip I’m now leading.

We start in Fairbanks, a weird little city that has hopes of becoming a metropolis someday, or so I’m told each time I come up here! Actually it has a leg up on other such remote towns, because this is the center of the University of Alaska. Space exploration and climate change are being studied from here more seriously than from practically any other place on the globe.

As the ice cap melts Alaska becomes a critical place for America’s interests there, and we’ve been falling behind for a number of years. While Russia has announced very new impressive ice-ships, America’s are almost as old as me!

From Fairbanks we head to Denali on the impressive Alaskan railway and scurry quickly out of the tourist confusion and congestion on the east side of the park. This is where all the cruise passengers on quick optional trips stay, and the place is like Macey’s at Christmas.

We’ll head 8 hours west to one of a handful of little lodges right under the mountain right adjacent the national park. Here the grandness of Denali isn’t obscured by the thousands of cruise passengers.

We’ll fly around North America’s highest mountain and then land in one of the funnest towns in America, Talkeetna! This is where all the real climbers of Denali start. The bumper sticker for the town reads, “TALKEETNA, ALASKA : A Quaint Little Drinking Village with a Climbing Problem.”

Will sample their sourdough pancakes as we sampled in Fairbanks and will in Anchorage. Some of us will go salmon fishing, some hiking and some rafting, all thanks to the magnificence of the foothills of America’s largest mountain.

Then after a quick night in Anchorage comes the pièce de résistance of this trip : a cruise! Don’t laugh! Unlike the 12,000 passengers on some of the Princess boats, ours takes … 11! (Plus crew, and usually plus a dog or two that belongs to the captain, bowsmen protecting us from orcas!)

No. No longer. Climate change has horribly effected the Glacier Bay that I repeatedly visited when I was young. But you don’t hear this simple fact often, because it’s a place that the big ships can go because the inlet is so deep. But it’s lost its treasures and if you really want to see the best of amazing coastal Alaska, it must be in Prince William Sound.

Stay tuned! As much as I can I’ll be posting as the trip proceeds.