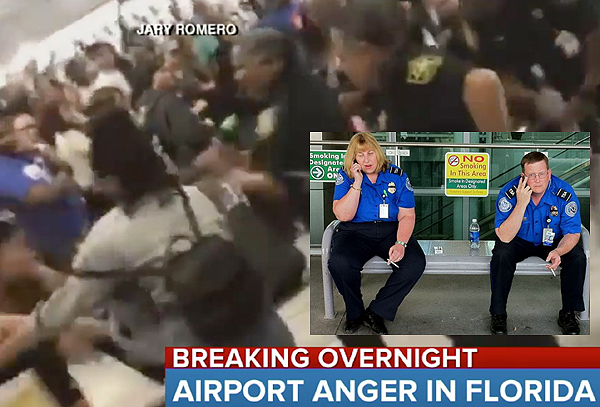 USA TSA Security is a joke that’s working for exactly the wrong reasons. So stepping into an airplane, today, in the US is like walking into a bawdy bar outside a Carolina industrial park where executives have just announced the closing of factories that are moving to Mexico. Beware!

I’ve just flown half-way to my first destination, the exotic island of Reunion. I’m in Paris after two fine Delta flights, but the experience in O’Hare and Detroit’s airports were scary and horribly disturbing.

TSA has been mocked and criticized literally before it was fully organized. But it is supposed to be fully organized by now, and despite Congressional budget cuts, they are the biggest bunch of incompetent bullies imaginable.

A foreign businessman in front of me in security was clearly worried when he confronted the team at O’Hare’s Terminal #2. I gave him plenty of time as he carefully took off his watch, unstrapped his belt, took of his shoes and neatly put everything in the trays, remembering at the last minute that the laptop had to be trayed separately.

He then stood in the line to be scanned and a typical, very typical and not unusual TSA employee gruffly waved him forward with a slight twist of his head.

Not all gestures are understood worldwide. I think that any American having seen that gesture would know it was alright to move forward. But this Italian didn’t. They have their own battery of gestures and this isn’t one of them. So the TSA bully strut towards him and asked, “Was anything wrong?”

I felt so motivated to do something stupid, but the American guest immediately cowered throwing up his palms while shaking his head.

He walked into the scanner and the same TSA bully shook his head and complained so that everyone on the concourse heard, “You gotta take out your wallet! Man, don’t you know that?”

The poor guy raced back his palms in the air, again, gingerly breaking the growing queue to get another tray, but basically looked totally and completely terrified.

The TSA guy laughed and mentioned to a nearby colleague, “God, I didn’t mean to freak the guy like that.”

How crass. I don’t know how else to characterize this. As someone who goes through many other world airports many times in the course of a year, nothing anywhere sinks to this level of juvenile behavior. It might keep the terrorist bomb off the plane, but believe me, it’s the greatest recruiting tool terrorists hope for!

So we got through security less contentiously in Detroit and we were in a congested line in the jetway to board the aircraft. Now you might know that congestion in jetways is actually outlawed. So it really felt odd. But as we reached the end of the jetway, just before it kinked to the left into the aircraft, we could see the cause: three 3 ICE agents.

Not TSA, but ICE. At least in the small section that I could see in front of me, the agent was stopping every person of color. And he didn’t stop any white person, including me. His two colleagues, like gorillas in the jungle, stood on opposite sides of the jetway like bouncers.

And bounce they did. A Latino happened to be in front of me.

“How long you going to be gone?” he asked. I didn’t know this was legal. We were leaving the country, not entering it.

“You a resident or citizen?” the giant bellowed.

Resident, she replied. He rifled through her passport.

“Oh, you got in on the E5,” he said dismissively. “Jesus,” he added quietly, moving her sideways to one of the gorillas, I expect for further interrogation of her legally obtained residency.

I’m not sure I ever agreed with the E5 visa, but it’s something we’ve had for 50 years. Bring in one million dollars or more and invest it somehow, and you get a residency permit… until now. The State Department is now restricting E5 awards, mostly to people politically connected to the current Justice Department or business associates of the Trump family.

But it wasn’t that ICE agent’s role to convey my opinion.

So that’s life traveling this year, folks. According to Bloomberg, “There is broad agreement that U.S. airports will not be a pleasant place this summer.”