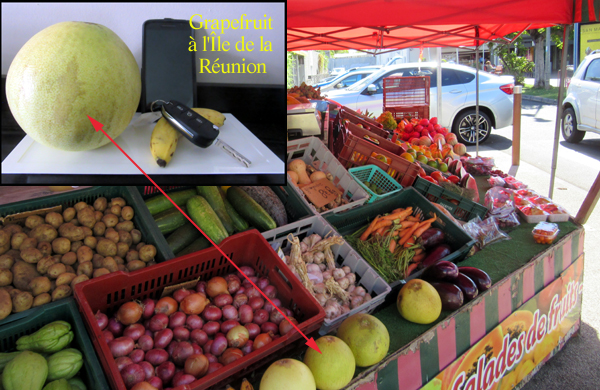 Right now I’m in the longest country on earth, more than 5900 miles across. No I’m not in Russia, which is a measly 4500 miles wide.

I’m in Africa in …France(!) doing a reckie before returning with my group next week. The Île de la Réunion is a départément, one of the 18 “states” of the French Republic. It took an 11-hour nonstop flight from Paris to get here. When I return next week with my intrepid travelers I’ll describe the remarkable attractions of this remote ecological paradise in the Indian Ocean. But here are my first impressions as any first-time tourist:

A jetway took us from the 777 aircraft into the modern airport, which is indistinguishable from any other major tropical island airport around the world: bright and cheery if a bit tacky (paint chips easily in the tropics), plenty if not too many airport staff with very friendly smiles and very slow actions. There just isn’t any urgency in getting anything done because no one will ever be left out in the cold. Waiting is a serious virtue.

Even the ubiquitous rain – which hangs incessantly over the tops of the islands’ volcanoes tumbling irregularly and unpredictably onto the coast — isn’t cause for concern. It will stop. Everything always feels wet, anyway.

So there were four employees behind the rather small AVIS counter, and I was the only customer. I got my car 30 minutes later. There was the matter of my printed reservation. It was in English, and while I’ve noticed that round the world English is spoken more and more (too much, frankly, for my own fun), here it isn’t.

One of the employees spoke passable English, but she preferred to hang over the shoulders of the woman who was assigned to me, pointing out the mistakes of her junior in communications. Once the reservation was located in the proper language, French, there was the matter of insurance.

“Mais j’ai beaucoup d’assurance!” I insisted in incorrect French adding to our language conundrums. Yes, I had English insurance but not French insurance, which for three days would be an additional 93 Euro. This Euro would be used — it was explained to me in several languages at once — in place of my thousands and thousands of Euros that would otherwise be used to repair a vehicle in Réunion, where the costs of repairs were much higher than in Paris, and where every tourist crashes at least once.

Everything is more expensive here than in Paris. A pamplemouse (grapefruit) costs about $2.50, an orange $2, and a grand creme, $2.25 although it was not grand. It was the exact size of the cup my dentist gives me to spit out the plaques pieces he’s just scraped off my teeth.

Réunion is essentially a fantastic couple still very active volcanoes that streak out of the very deepest parts of the ocean more than 10,000′ high. It produces incredible scenery and a very expensive transportation industry that includes steel wire mesh stretched over the sides of all the towering cliffs looming above the roadways.

Most of the tiny French cars used here in the too many thousands can be flattened with an errantly dropped campaign poster for Marine le Pen from any of the too many helicopters ferrying tourists around the island, much less a granite boulder when Piton de la Fournaise shakes the island with another eruption.

Beaches, actually, aren’t very nice. The island is too geologically new for nice sand, and the relentless, angry surf is constantly washing it away from the boulder sides, anyway.

So most of the tourists are kids with death wishes (most teenagers) who come here for the world’s most death-defying hikes, rock climbing, repelling or surfing. Surfing is actually just as dangerous as the rest. The waves are stupendous because of the deep water edges of the islands, but that also means sharks. Last year there were 54 surfers attacked by giant sharks here, and half were fatal.

Rio Tinto can’t mine the world’s most dramatic scenery, it’s hard to grow corn on towering cliffs, and sharks and 20-foot high waves just off shore tend to discourage fishing.

So the cost of keeping Réunion afloat to the French government is considerable. Maintaining a highway system around some of the most active volcanoes on earth like fueling a truck that rarely gets out of second gear is enormous, but so is supporting the throngs of citizens who seem to spend much of their time at the beaches for want of a job.

But French pride is so profound that any notion of abandoning the place to the insatiable industry and greed of super productive nearby mostly Anglophone right-wing Mauritius is unthinkable. Instead, the country encourages pensioners to relocate here, which they do in droves propping up the economy and keeping the price of a grapefruit above my budget.

By the way, in this lush tropical paradise, almost all the expensive fruit in the supermarkets comes from Israel. After you get over your surprise that a country defined by its deserts supplies fruit to a tropical island of rain forest, consider also that there are plenty of other countries that could also do this which are much closer than Israel! South Africa, Australia or India, for three! But Réunion has no direct air service from South Africa, Australia or India, and no port.

The only nonstop air service into the island is from Paris, or nearby Madagascar or Mauritius, both islands themselves which import practically everything as well. The Paris flights are subsidized by the French government, so it’s actually possible on low cost airlines to fly here for less than $400. That’s for an eleven-hour flight of almost 10,000 km. At that rate you could fly between Chicago and New York for $40! Cargo is also subsidized.

The French government is trying extremely hard to develop industry, spending billions on a new deep water port using remarkable new technology that only 20 years ago was unimaginable. New if daring technology is required to build a port on a shore that declines in a 40-degree slope into the Deep Blue Sea.

So a highly subsidized society with a highly specialized tourist industry which features death and destruction leads to a very expensive daily upkeep.

In fact I’ve noticed my Euros disappearing extremely quickly. Besides the island’s teaspoon version of a Grand Creme sold at the same price as a properly sized one on Boule Mich, a pair of flip-flops starts at $35, hotel rooms without air-conditioning or much furniture and shared bathrooms start at $125; a rather ordinary sandwich lunch is $40, $43.50 with wine and $55 with bottled water. Skip dinner. A taxi from the international airport to the center of St.-Denis costs as much as renting an AVIS car for a day. No international calling plan from American carriers, so calling home is $7/minute. Use Skype.

So that’s the dry French-leaning first impression version of remote Réunion. Don’t take it too seriously. Like so many things French, once you navigate through the first murky often obtuse accueil some magical discoveries lie ahead! (Or in this case, up high!)

Here’s just such a repenser: yes, my Israeli fruit found in the supermarket was expensive, but my Réunion grapefruit found in a street stall was better: $3.50, the size of a kickball! Jack fruit, lychee, papaya, tamarind and strawberry guava! Strawberry guava? Stay tuned!