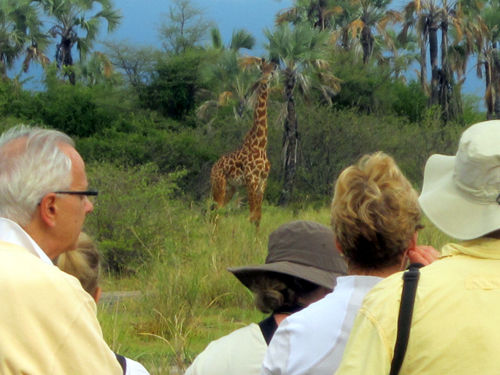 Tarangire National Park is the perfect place to demonstrate there are too many elephants in the wild right now, and it didn’t fail to confirm the theory this time! We had exceptional game viewing based from a new, luxury lodge called ChemChem.

Our day and a half of game viewing in Tarangire probably encountered 500 or more elephant, but it’s so difficult to estimate. In one panorama I challenged everyone in the group to count the elephants we saw, and the numbers ranged from 120 to 180.

Traditional elephant behavior breaks down in Tarangire because there are so many elephants. Families don’t separate themselves from one another but often travel, forage and frolic in the river together.

We saw week-old babies and octogenarians. We saw good tusks and many bad tusks or little tusks. We saw many babies and watching the rest of the family protect these little guys is absolutely wonderful.

And protecting them is so hard to do! Especially when they get down to the river and insist on rolling well beyond when mother thinks it’s time to leave.

We stayed at a new lodge outside the park for our first several days in Tarangire, before moving into the park and staying at a great place inside. The lodge is called ChemChem and it’s the dream of several French investors and old African hands.

Placed between Tarangire and Manyara, the ChemChem property extends all the way to the shores of Lake Manyara, and the activities my group enjoyed were really fantastic. 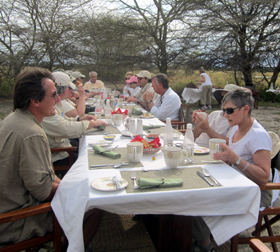 They included a walk where we got remarkably close to impala, giraffe and zebra. I don’t allow walking if there are predators or elephants around, and ChemChem assured me there weren’t.

A fabulous bush breakfast, Maasai sundowner chorus and sundowner along the lake are all a standard part of the ChemChem fare.

We’ve had some very heavy rains. According to the folks here, it’s just the rebeginning of the rainy season which starts in November/December and continues straight through May, with a noticeable letup in February. Well, the letup is over.

It was wonderfully exciting to go to sleep in ChemChem’s marvelous tents to the performance of lightning, thunder and tumultuous rain. I’m of course glad for this, because it means the migration in Serengeti (if the rain continues that far) will start to concentrate.

On our first game drive towards our second camp in Tarangire, Swala, we encountered again numerous elephant, lion mating, leopard, hartebeest and I’m sure I’m forgetting lots more. It’s been a wonderful two days so far, with another to go, in Tanzania’s elephant park, Tarangire. 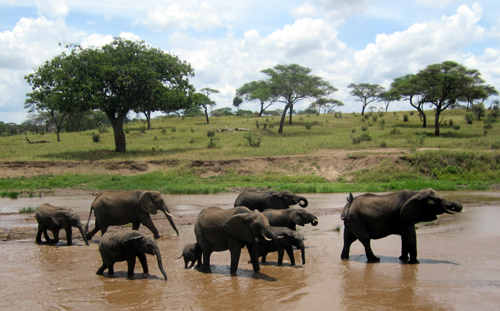