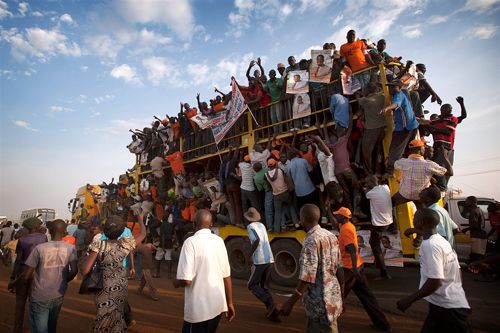 There were 44 observers from the Carter Center watching the Kenyan election last night but all they observed was joy and glory! As I write this in East Africa the winners are not yet known, although Uhuru Kenyatta has a significant lead for president. But so far only 5 million on an estimated 10 or more million votes have been counted.

I was in Kenya when the polls closed, for just a few hours on my way to guiding my first Great Migration Safari.

The whole world watched as Kenya masterfully pulled off the first national election under its new and fabulous constitution. Final results will be some time in coming, because the constitution mandated that the winners achieve minimum support from all of Kenya’s 47 counties, denying any victory based exclusively on ethnicity.

This means despite Kenyatta’s lead another election between the leaders could well occur within 30 days in order to finalize the results. But based on last night I’m already creating a “Celebrate Kenya Safari” return trip!

Kenya knew that it had to prove to the world that the debacle that followed the last election in 2007 would never happen, again, and that it has truly emerged into the modern world. Moreover, it displayed a transparent democracy I don’t even think America could rival.

It wasn’t perfect, but no election is. In fact, it began ominously with an early morning attack on police poll watchers in the troubled second city of Mombasa, and 4 policemen and 2 poll workers were gunned to death.

The authority governing the election had assured that anyone in line before 5 p.m. would be allowed to vote, no matter how long the line was, and in some places it stretched for nearly a mile. But in Kilifi, north of Mombasa, election authorities ended the process at 5 p.m. even with a long line waiting, because of reports of imminent attack.

The coast remains a troubled area for a number of reasons, most importantly that it’s mostly Muslim and seriously impacted by Kenya’s occupation of neighboring Somalia.

There were long lines in many places, and some polls didn’t close until 10 p.m. In a number of areas poll officials with legislated authority simply kept the polls open even for late comers.

Kenya has more cell phones per capita than the U.S. and a free app was available that voters would use to report irregularities. And needless to say, with 10+ million voters there were many. It will take many weeks to sort them all out, but ???

I’m sure that many tour operators like EWT were waiting with baited breath. We could not restart Kenyan safaris without a positive result, and it was beyond our best hopes.

There were 14.4 million registered voters. In addition to the executive president, the election chooses governors and one senator from each of the new 47 counties, 290 national assemblypersons, 1450 county representatives and 47 “women’s representatives” who have a remarkably unique role in the new constitution.

There were 53 political parties, of which there are 8 major contenders, that fielded 12,752 candidates. The country managed 33, 400 polling places with 6-10 poll workers each, secured by 99,721 security personnel including police and … even rangers from the Kenya Wildlife Service!

Voter ID – a contentious issue in the U.S. – was mandatory, and there were two steps checking it. Approximately 20,000 fraudulent voters were stopped from voting, and although that’s insignificant statistically, it underscored how important Kenya felt legitimate democracy must be.

Elderly, disabled and pregnant women could immediately go to the front of the line. Anyone at all who wished assistance could vote with an assistant who pledged “secrecy” regarding the person’s vote. This is a brilliant addition to a country still not yet at 100% literacy.

Voting machines were high-tech, but there were parallel methods of hand counting when the machines failed, which inevitably some did.

So we won’t know for a while the final outcome, but the start is nothing less than stupendous! In a way, the fact that the process worked is what achieves the real victory.