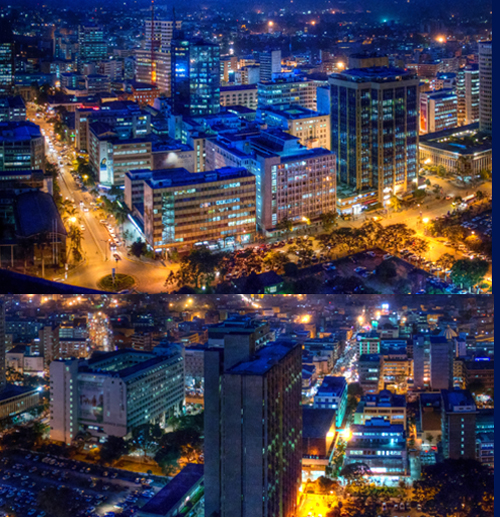 Nairobi is transforming faster than a teenage girl getting ready for the prom.

I arrived on time with Swiss from Zurich at 6 p.m. sharp. The airport is like a transformer being born, huge amounts of new terminal construction. As always airport staff was prompt, courteous and professional. The bus that took us to the temporary international arrivals hall was clean and swift.

I bought a visa, picked up my luggage in the new somewhat hiphop carousel area (with its popular music, many ads and neon red painted piping) walked out into the beautiful Nairobi air, picked up a 100,000 shillings in a snap from an ATM, ordered a cab, bumped into an old friend, and was in the car heading into town in 18 minutes and 14 seconds after we landed.

And I got to my hotel two hours later.

It’s “Members Night” — the local vernacular for Friday night party time. I was on the three-lane superhighway into town, designed for us to speed over the underpasses and under the overpasses, but the traffic in both directions was absolutely unbelievable.

First of all, it’s one giant industrial city from the airport to the city center. The new buildings are immense and many still in construction. The cars on the road all seem new, from BMWs to Hummers to the main city brand, Toyotas.

My fabulous cab driver new all the backroads, which were also clogged but at least were moving. When we did stop we had time to buy excellent CDs, all copied music and music videos pirated from major stars around Africa, for Ksh 100/ each. That’s about 90 cents. Each CD had the requisite 13 or 14 songs.

At least it gave us something to do when stopped in traffic. Because after all, you can’t trust a hawker with a pirated music CD. You’ve got to play it through!

When we finally got to the fabulously new and spectacular Villa Rosa Kempinski there was new delay, which I understand is true at every hotel. Every car is thoroughly patted down, with lights and metal detectors, before it’s let in to the normal cul-de-sac.

The security guys are friendly, excellently dressed as if coming from a ball, and spoke perfect English (to me) and German (to the clients in front of me).

Then at the entrance to the hotel several attendants took my luggage — no, I couldn’t take it myself, because it had to be carefully scanned and searched.

I had to walk through a metal detector that was more sensitive than the TSA one I walked through in O’Hare.

Then, finally, I checked in. And like so many hotels today in Nairobi, you aren’t just checking into a hotel. You’re checking into a huge walled complex of multiple restaurants, shops, fitness centers, pools and outdoor cafes.

The vibe in Nairobi is amazing. This city will one day rule the world. But for the moment, for tonight anyway, it’s almost as if a war is going on.

“It is,” the bellman explained to me immediately.

“The War on Terror.”