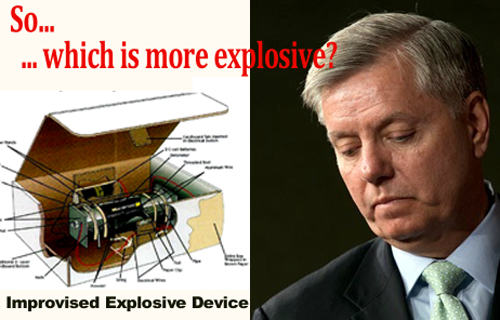 I and Kenyans woke this morning to the news of a bloody terrorist attack near Lamu. But what worries us even even more is that the U.S. might restart the Iraqi war.

CNN’s “State of the Union” is the most widely watched American show in Kenya. It comes on live at Sunday dinner time.

So Kenyans who woke the next morning to actual terrorism watched with even greater horror as Sen. Lindsay Graham called for a virtual reverse jihad.

The U.S. Right spent Sunday warning of a “califate” that would be a super threat to the U.S., an ISIS that would rebomb the World Trade Center.

This is utter nonsense. Don’t take the bait, America. What is going on in Iraq is a civil war, not global jihad.

Nairobi’s leading newspaper in its leading editorial this morning claimed the resurgence of war in Iraq “serves as graphic testimony that Western military adventurism in the region not only failed to extinguish the flames of extremism, but might have added fuel to the fire.”

“Stepping into the bloodbath of Iraq would be madness,” was the headline in one of London’s leading Sunday newspapers.

Why are we more afraid of terrorism than driving over a bridge ready to collapse or dying of cancer?

As I wind up my three-day visit to Nairobi I realize how horribly warped American paranoia of terrorism is and yet how impossible it seems to remedy.

Terrorism is increasing. The Rand Corporation’s most recent report shows a 58% increase in significant jihadist groups, a doubling of fighters and a tripling of attacks.

There’s no reason to doubt these numbers. And here are some more:

What are we afraid of? Or more specifically, why do we fear terrorism more than the highway or the gunman in the classroom?

Kenya has had an unfair share of terrorism fatalities, injuries and damaged economies, because it has been targeted by terrorist groups for its proxy war against al-Shabaab in Somalia, a war that it would not have chosen to do, nor been capable of doing, without serious pressure and military assistance from the west, primarily the U.S. and France.

So as Kenya’s rate of terrorist harm has increased dramatically in just the last few years, France’s and the U.S.’ has declined.

Yet there is a palpabale fear in the U.S. that this is not the case. That fear is the success of terrorism, making its victims’ communities feel threatened out of proportion to the facts.

Imagine if the trillion plus dollars spent on the wars of retribution and against terrorism in Iraq and Afghanistan had been directed instead to America’s leading cause of death, cancer and heart disease, both which average 25 times greater than the worldwide deaths from terrorism.

With that amount of money might we have already achieved a robot car whose driver, even if drunk, would be unable to cause an accident thereby reducing American fatalities, currently 2-3 times worldwide fatalities caused by terrorism?

Clearly it’s not the deaths that bother us. So it’s not the threat of fatalities that must bother us, it’s the challenge to our power. A relatively few deaths caused by terrorism create a proportionately greater fear and insecurity.

DUIs, suicides, cancer, school shootings … we’ve learned to live with and do not seem to threaten our way of life. We must learn to live with terrorism in the same way. As an actual threat, it’s actually much, much less.

Kenyans know this. The country is booming (except for tourism). Everything from Google to IBM to Caterpillar to GM is investing heavily here. The energy of its youth, the rapidly increasing level of education and the imaginative ways difficult problems are being solved is becoming a model for the world.

But the beautiful white sand beaches, among the finest in the world, and in the incomparable wilderness and big game are being abandoned by world travelers.

There has not been a tourist assault death here in more than two years, nor an injury; nor have any foreign investors been bumped off or maimed.

Those are pretty good numbers for any business person. But as explained above, numbers mean little when it comes to scaring people. Terrorism, the wanton killing for ideological reasons, scares people more than potholes on I-80.

So as irrational as it may be that you will choose to visit New York instead of Nairobi, where any way you run the numbers your chances of being killed or hurt are much greater, you’ll feel better doing it.

And that’s why terrorism is so successful. And that’s why it’s more important than ever that we start to educate ourselves to the priorities of need we truly have.

Before terrorism wins against us all.