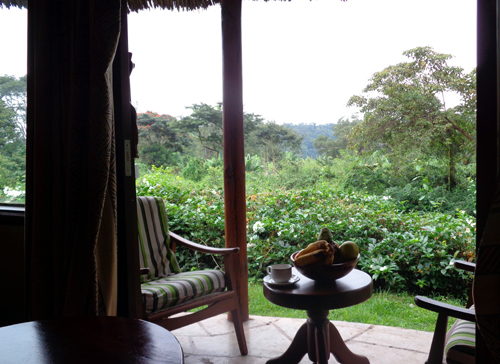 What do kids do the first morning after arriving in Africa at 2 a.m.?

Normally, sleep. In fact sleep so deeply, whether they’ve slept or not on the planes, that they wake up completely disoriented.

But not so my Kisiel Family! Playing the numbers, I slept a little bit more than usual, since I met them on the now very popular Turkish Airlines flight that daily arrives Kilimanjaro at 1:10a.

Immigration and customs is pretty easy at 1:30a at night in Kilimanjaro, and so we were on our way to Serena’s Lake Duluti Lodge hardly a half hour after the plane landed. It was about a 40-minute drive … in the dark … but young Nicholas positioned himself in the front seat, stiffened his back and followed the car’s headlights on the pavement for any trace whatever of lion.

Fortunately for Arusha residents there aren’t any, but that didn’t deter Nicholas from his half-hour vigil.

The two-lane paved road from the airport is fine, with numerous speed bumps so no one feels the least uneasy except that it’s so dark.

Turning off into any of the lodges in the area right around Arusha, though, means the first experience on a very badly kept dirt or gravel road. And that wakes everyone up. Our experience, though, lasted all of a few minutes.

I already had the keys to the room so quickly assembled the 14 in the family, aged from 6 to … well, grandparents’ age … and explained simple things like having to double-flush the toilet and keeping a flashlight at your side at all times because of Arusha’s constant and troubling power outages.

And I sent them to bed telling them not to be scared of the hadada ibis in the morning, whose sunrise call sounds for all the world like Napoleon’s charge at Waterloo.

Three a.m. rarely needs more encouragement for hitting the sack, but it was in the middle of the American/Ghana world cup match. I watched it for 13 seconds before falling asleep.

It’s always a delight sharing my clients’ experiences of their first waking moment in Africa. More and more flights are arriving at night, so there really isn’t a lot of orientation available until after you’ve gone to bed, slept, and then are awakened by the honking of the ibis.

The word most clients use to describe their first lighted scene is “jungle.” It’s not wholly accurate, of course, since it’s much colder than a real jungle. Today we woke up to temperatures in the lower 60s.

That’s because this area around Arusha, the foothills of Africa’s fifth highest mountain, Meru, are a mile high. But looking out over your room’s deck, it does look like a jungle.

Our particular view is of a beautifully landscaped hedge of hibiscus, bougainvillea, and forget-me-nots, separating the wild and thick bush beyond from the individual rooms.

And that includes lots of wild bananas, massive mango and mahogany trees, a peppering of acacia (we get many, many more of those on the veld) and every once in a while a glimpse of the crater lake Duluti.

I was enjoying my coffee on my deck, trying to delay going too early to the breakfast room since I expected they would all come quite late.

But not most of the Kisiel family! They were down early, eating and enjoying their first morning long before I expected!

On to Tarangire! Stay tuned!