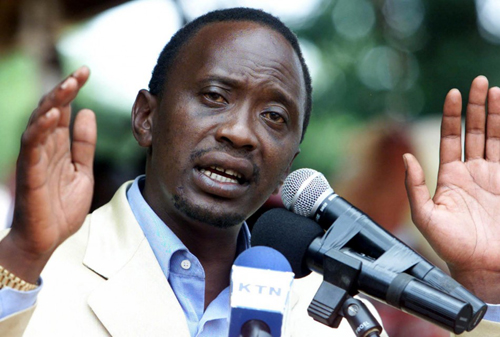 As I write this Sunday night in East Africa, a man indicted for crimes against humanity is Kenya’s 4th president, and the place is quiet if solemn.

None of the foregoing may last long.

Uhuru Kenyatta was declared the 4th President of Kenya by the election authority, having won 50.07% of the vote. His nearest rival, Raila Odinga, had less than 44%. Nearly 85% of the registered voters participated.

What that would mean is that Raila Odinga would have to command nearly all the votes that were cast for the other six candidates combined, and that seems to me unlikely. However, note that I also thought it unlikely Kenyatta would win.

The strength of Kenyatta’s polling rested heavily on his success in getting out the ethnic voters in the Rift Valley. I’m sure he would be similarly successful a second time around.

If Kenyatta remains president, or is confirmed in a run-off election, he will be the first sitting president in the world to be on trial for crimes against humanity in The Hague.

Those charges stem from the World Court’s assessment of years of fact-finding that Kenyatta was instrumental in provoking and sustaining the horrible violence that followed the 2007 elections.

The U.S. and Britain have already warned Kenya that Kenyatta as president would have “repercussion” on bilateral relationships.

It doesn’t really matter whether Kenyatta fulfills his promise to attend the trial.

The very fact he stands accused in a criminal court system which rarely arrives at the point of a trial without substantial evidence to convict is alarming.

Raila Odinga is aggressively challenging the decision in the courts, and he has substantial evidence behind him, but he is also constantly telling Kenyans to remain peaceful.

What is a peaceful Kenya with a rogue president?

Oh, and by the way, his Vice President, William Ruto, is on trial with him, and from my point of view, is evil incarnate, by far worse than Kenyatta.

I don’t know. I don’t know whether to trust the people of Kenya so long as they remain peaceful and work within the system they so tirelessly created, or to trust the world system whose suspicions about Kenyatta and Ruto are deep and severe.

We must let more time pass. That’s the African way.