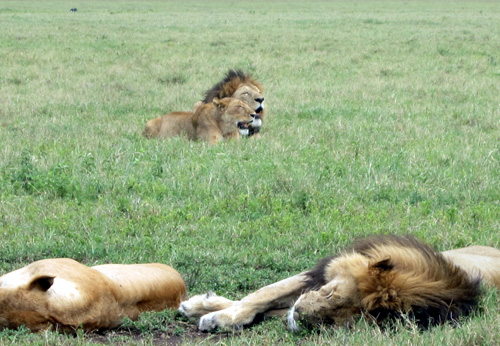 The crater was greening up following several days of heavy rain and so was particularly beautiful.

As Nancy Weinstein said, “Seeing the rain on one side and the sun on the other with all the magnificent light” produces the ethereal reality of the crater, as if you’re in some controlled smaller space where so many different things are happening so fast.

The Up Road is closed for repairs, so everyone has to leave the crater on the Sopa Road.

This makes game viewing for some of the opposite side lodges, like Serena and Crater Lodge, particularly long.

We were staying at Gibb’s Farm so were prepared for the lengthy time getting in and out.

We also went in using the Sopa Road and weren’t a few minutes out of the Lehai Forest when we saw our first pride of lion.

I was pretty sure it was the Mti Mkubwa pride (“Big Tree”) and they were incredibly fat and sassy.

We figured there were five of them, but they were pretty far in the distance and totally sacked out. Patience is the key to exceptional game viewing and we waited for a while and sure enough, they began to get up one by one and walk towards us.

With more to view as they approached, it was clear they had hunted last night. Their bellies were bulging. And I noticed not far from where our cars were on the road that there was a gully, and with all the rain we’ve had, undoubtedly plenty to drink.

And that’s exactly what happened! After lions feast on their kill, they have to drink copious amounts of water or the 15% increase in body weight resting mostly unchewed in their tummies would clog their entire GI system. 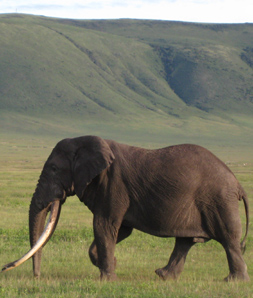 Undoubtedly they had drunk once at least, but they were now returning to drink again. And after they did, they continued towards us onto the road! So there was more to their moving than just thirst.

Lionesses “den” their cubs somewhere during the hunt, and the cubs obey. Sometimes an adult female will be left behind to baby sit, but not always, and it’s always amazed me how those little critters know not to follow mom.

That was just the beginning! We then proceeded to find rhino, huge families of buffalo, of course lots of zebra and wildebeest and even hartebeest and eland. Just before lunch, we went to the hippo pool near the central lake.

Lunch was great fun in front of the Loitokitok lake, which had more hippo in it than I remember in times past. The great treat was watching a grey heron standing on the back of a slightly submerged hippo, moving through the water as if slow water skiing!

(Our picnic lunch from Gibb’s Farm was specially outstanding, but of all the goodies included I’ll never forget the brownie! Amazing.)

We saw more rhinos on our way back, and more prides of lion, and golden jackals, serval cat and a number of great birds. The large numbers of Abdim and White storks are getting ready to migrate back to Europe, so there was a lot of colorful soaring.

And it was on the way out that we once again encountered the Mti Mkubwa pride, and this time a female was dragging around the skin of a young buffalo. So it had been the kill they were returning to.

And our last glimpse of activity in the crater as we raced to get out of the park in time was one of the giant tuskers that are dying off fast.

About 30 giant tuskers went into the crater when poaching became severe in the 1970s. The crater affords a natural protection to wildlife that makes poaching very difficult. But the crater isn’t a good habitat for elephant: there aren’t enough bushes and trees; it’s almost all grass.

But the Big Tuskers learned to eat grass and have stayed ever since. But they’re now well into their 60s and dying quickly. I expect they’ll all be gone in 2 or 3 years.

** And just a little aside about our game drive Sunday in Lake Manyara National Park. See the picture below. Manyara is known for lots of baboon, true.

But we watched a young bushbuck walk with them in near lock step, stopping when they did, moving when they did and where they did. For all the world it looked like it had been adopted by the troop!

And now into the Serengeti! 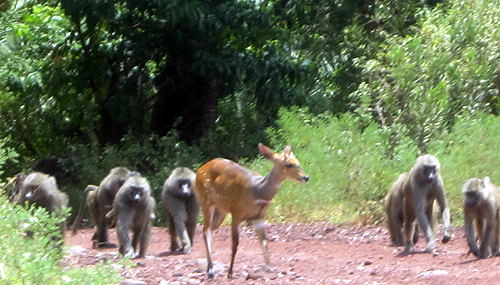