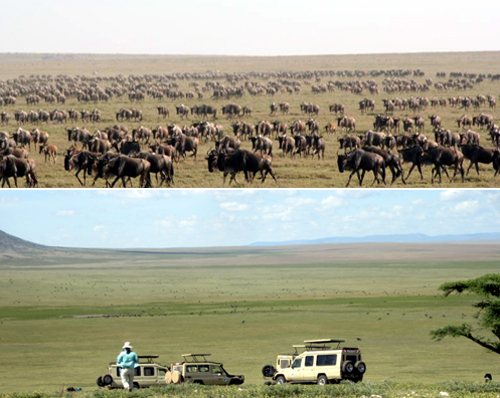 This year’s Great Migration is an almost constant sea of animals from the eastern Serengeti plains to the western and beyond, one of the most placid and easiest to see that I can remember.

Seeing the migration is like seeing the stars. You can never see them all, and you can’t even see at once all those that might be in your field of vision. The sky is just too large, and so is the Serengeti. Two million animals might not seem like a lot when you’re atop Naabi Hill, but it is.

I figure that at the very best views of the Serengeti, one of which is atop Naabi Hill, when pointed in any one given direction the most you can see is about 25 square miles, and if the animals in the migration were packed into every crevice of that view, you’d maybe see 150,000 animals, a tenth of the great migration.

The migration for us this year is not sardine packaging.The veld is green and beautiful across almost the entire southern Serengeti, and so the grass is abundant everywhere. The animals are dispersed much more than they would be during drier years.

We started seeing wilde right after leaving Shifting Sands outside Olduvai. We saw them continuously, although sparsely, over the plains between Shifting Sands and Lemuta Kopjes.

We had lunch atop one of the unique kopjes opposite Lemuta where the view was incredible. To the south was the giant Ngorongoro on our day covered by a super storm. But while we could see the lightning, the rest of the sky – probably 80% of our sky view – was clear and beautiful.

At lunch the density of the wilde increased. As we moved west towards Ndutu it fluctuated but we were never out of sight of large groups of wilde, and as we approached the main road the density was quite high.

We also saw many other animals, of course, including many hyaena, jackal and as a great bonus, nearly 200 eland. That’s especially beautiful as the world’s largest antelope (1600 pounds) when in a truly wild situation is especially skittish.

This massive and beautiful antelope runs at breakneck speeds and leaps nearly 8′ into the air, and unbelievable sight.

And of course we saw several kills, or possibly deaths caused during bad childbirth, covered with birds and hyaenas. This is the season for birthing, and one day we spent nearly an hour just watching a nearby female herd of wilde give birth.

That’s why this is my favorite time for the migration. It isn’t as dramatic as the racing across rivers chock full of crocodile that starts in June and continues through September (at different parts in the Serengeti and Mara), but those events are very irregular and hard to intersect.

Whereas the birthing time is when the entire herd comes to feed on the new nutrient grasses brought by the heavy rains. So everybody is together, more or less, even if more widely spaced and much calmer.

And unlike the “racing time” where the herd is fractured into innumerable smaller groups, now it is more or less uniformly on the southern grassland plains. And seeing the newborn gives an added dimension to the experience.

Nothing can ever be guaranteed in the wild. A shift in weather, an insect blight, and even an over- or under-population of animals can result in radical changes in numbers and locations. But this year everything was – more or less – normal, and we witnessed what is absolutely the greatest spectacle in the natural world.