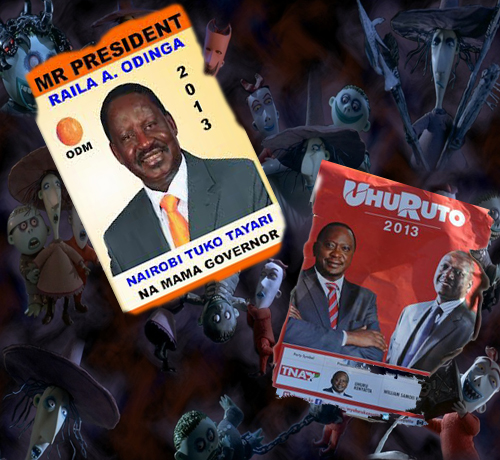 Kenya is peaceful but disturbed. A famous national analyst Saturday said the country is “on the brink of implosion.” The loser in the presidential election is challenging the results in court, but if he loses the president and vice-president of Kenya will be international criminals indicted for crimes against humanity. This is not acceptable.

“An uncomfortable silence pervades the public sphere,” Godwin Murunga wrote this weekend in Kenya’s largest newspaper, the Daily Nation. “We are afraid of our feelings.”

So the country waits on pins and needles and does so by being quiet. A once robust media discusses fashion and school tests while the Joker and his prime assistant prepare a government of iniquity. A fabulous new constitution sits like an butterfly in a cocoon waiting for a dictator to roast it before it hatches.

And the world holds its breath, so happy there’s not another war or revolution, hoping perhaps beyond hope that the New Kenya will right itself.

The mistake came long ago when in the many wonderful and difficult things the country was doing to recreate itself, it allowed indicted international criminals to become candidates. What else could it do? Does not democracy revere the right of the accused to be considered innocent until proven guilty?

And, in fact, multiple accused by the World Court in The Hague have been ultimately released or original charges dropped before trial.

But I think the more important fact is that the World Court’s standards for irrefutable evidence is so great – so much more substantial than country courts around the world including the U.S. – that just to be indicted is at the very least reason to prohibit the indicted from assuming national office or responsibility.

Even as a contradiction to democracy and the purity of law that governs it. The interlude between indictment and conviction was the loophole that put Kenya in the mess it finds itself, today.

And that’s the point. So even while people like myself are convinced that Uhuru Kenyatta and William Ruto will be convicted by The World Court, their simple indictment should have prevented Kenya from allowing them to become candidates.

Uhuru Kenyatta and William Ruto, the current president-elect and vice-president-elect, are not nice guys. They are greedy, conniving politicians whose families have looted the poor Kenyan for generations.

Their success was brilliantly created. Singly they couldn’t survive, because they come from tribes that are historical arch enemies. Together they combined their enmity to defeat all that was good in Kenya.

Raila Odinga, the challenger who lost, is not purity incarnate, but he is considerably less corrupt, untainted by scandals, and was not the least bit implicated in engineering the violence of 2007 as the ICC has charged Kenyatta and his running mate, William Ruto, were.

Odinga’s challenge of the outcome of the election in the Kenyan courts is substantial. Kenyatta was declared the winner by less than 8,000 votes of more than 12 million cast. The election was bungled. One of Kenya’s finest analysts called the election “shambolic.”

The list of counting grievances includes districts whose vote tally exceeded the number of people registered there. It includes up to a half million votes that were declared spoiled by incorrect marking, even while the intention of the voter was clear.

It includes thousands of discrepancies between parallel methods of counting that were intended to confirm one another.

It is, in a nutshell, a mess. And it is that mess that even if too complicated to untangle stands as a powerful reason to claim that .07% of the votes cast might not be legitimate.

Yet at the same time peace has been sustained and security prevails, today. “Many Kenyans… have spent the last 5 years trying to avoid a repetition” of the violence of 2007, writes Magnus Taylor, a South African who reported daily from Nairobi on the election. But he adds:

“Kenya is far from being over the nightmare.”