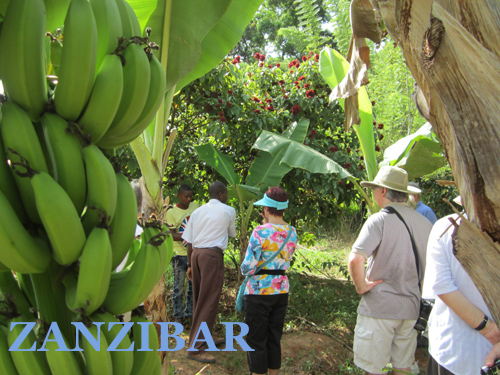 It’s still too early to return to Kenya, so my migration safari began not in Nairobi but in Zanzibar. We had three wonderful, very hot and fascinating days!

It rather breaks my heart to substitute anything for Kenya, which as a society is so incredibly hopeful and promising. But the tourist incidents recently in the north, the kidnaping of NGOs near the Somali border, and the bombs in Nairobi city — however ineptly undertaken – all prove that the Kenyan invasion last October of Somalia has spawned revenge attacks that in my opinion make a safari in Kenya ill-advised.

And Zanzibar is one of the most fascinating places in Africa, for it was here that literally “it all began” in East Africa. Colonized in the early 16th century by Portugal, then conquered by the Omani Arabs almost two hundred years later, East Africa’s culture, language and much of its difficult politics was fashioned here in the ‘Spice Island.’

Our first excursion was to see a spice plantation cooperative outside Stone Town. Every spice imaginable is grown here, and it was so remarkable to learn how mace is harvested from the outside of nutmeg, how chilies grow wild, and how almost interminable stripping of the cinnamon tree for its bark does nothing more than promote more bark to grow and more cinnamon to be harvested!

The crown crop is cloves. First planted by the early Omani sultans who realized a business game changer if spices could be harvested less than half the distance from Europe to Indonesia, cloves production continues to be among Zanzibar’s chief sources of foreign reserves.


We then visited the Jozani Forest, Zanzibar’s 20 sq. mile protected wilderness that contains almost 100 species of trees and thousands of unusual plants, flowers, and the main attraction for animal lovers, the Zanzibar red colobus monkey.

The monkey is the last large wild mammal on the island, and its protection is secured principally by the revenue earned by tourists like us coming to see them. And over the years they’ve become remarkably habituated. Multiple times they ran around our feet, swung by our faces, and sat for long minutes giving poses for perfect pictures!

Jozani is also where visitors can learn how important the mangrove forests are to protecting the island. They create a natural barrier to rising tides, tsunamis and typhoons. We were fortunate to go at low tide, when many crabs and fishes could be seen as well, and my compliments to the Zanzibari authorities who constructed the walkway out into the sea through the forest.


The last guided tour we took was a historic walk through Stone Town, its bustling food and fish markets, several of its narrow stone streets and ultimately to the former slave market which became the site of the first Anglican church and is now a museum.

And we ended with a cruise in a dhow at sunset! The “live music” aboard wasn’t exactly Zanzibari or African (Beatles is particularly popular, here), but other than that the opportunity to experience traveling as the early explorers and traders did was a real treat!

On to the great northern circuit! Stay tuned!