by Conor Godfrey
Media producers and consumers alike tend to analyze current events using the framework provided by the most recent, similar set of events in the past.

How often did you hear the Arab spring compared to the democratization of Eastern Europe last year?

This is neither good nor bad, just somewhat confining.

I think this is happening with Boko Haram now.

Most western readers have probably heard something about these guys.

They are usually described as ‘Islamic jihadists that want to implement Shari’a law in Nigeria.”

We (middle class American readers like me) are used to these buzzwords – jihadist, Shari’a, terrorist- and they evoke a set of dependable associations.

Whether we are talking about people in Indonesia or Pakistan, Iran or Chechnya, these buzz words still conjure up images of Arabic speaking Middle Easterners that want to kill infidel Westerners for reasons that we cannot fully understand.

However, politics are always local.

Nowhere – not even in pork-laden West Virginia—is that more true than Nigeria.

Even the name, Boko Haram, is a local nick name in the local Hausa language (well, the word Boko anyway).

Perhaps the Boko Haram PR guy realized the media would refuse to cover them if they had to pronounce “The Group Committed to Propagating the Prophet’s Teachings and Jihad on the Air.”

While Boko Haram certainly pays homage to the worldwide phenomenon of political Islam, their roots are as local as hot pepper soup and Tuwo_masara. 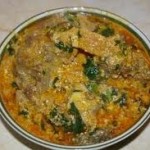 In modern times, the group cut their teeth protesting endemic violence and corruption in the local government and security services.

These grievances became increasingly violent after the founder, Mohammed Yusuf, was tortured to death in police custody in 2002.

Boko Haram is also both a pawn and a player in a specifically Nigerian regional power dynamic.

The young men that killed themselves driving trucks filled with explosives into the U.N. compound in Abuja certainly had religion on their mind, but the people paying for the training, giving the organization political cover, or using the group as leverage with the Federal government may not be in it to guarantee their place in paradise.

Richard Dowden does a great job here discussing the morass of motives and incentives that could be driving Boko Haram’s activities.

Dowden also notes a tragicomic list of people and organizations that are using the Boko Haram brand for their own purposes—criminal syndicates: an arsonist churchgoer and northern Nigerian politicians are just some of the groups that have use the name of or affiliation with Boko Haram for purely local shenanigans.

Boko Haram itself might also be guilty of brand profiteering – with al-Qaeda.

While some members of Boko Haram certainly feel sympathy toward the pan-jihadist Qaeda platform, others probably see financial and logistical support.

As Boko Haram morphs into an umbrella for a number of different factions and interest groups, it will become increasingly difficult to negotiate a settlement that will stick.

My opinion is that Boko Haram’s main target is still the Nigerian government, and not the foreign crusaders and infidels identified in global jihadist rhetoric.

This means that solving the problem requires solving local triggers – not necessarily taking all of the militants off the field.

(Though that certainly helps if you can avoid making the local population hate you.)

In this case, the local trigger is the massive development gap between Southern and Northern Nigeria that fuels resentment, xenophobia, and radicalism. (see wealth map)

It also means dealing with local flashpoints that feed the anger that in turn feeds Boko Haram – things like conflicts between settlers and so called indigenes, fair policing, and an education system that both moderate Islamists and the government can get behind.

If our mental filing cabinet wants to associate these guys with Middle Eastern jihadists, you can be darn sure that the average Nigerian would like to think of them as foreign too.

But I think societies need to claim the radicals at their margins no matter how unpleasant the thought might be.

These guys are Nigerian, and any global dynamics should be viewed through the local lens first.