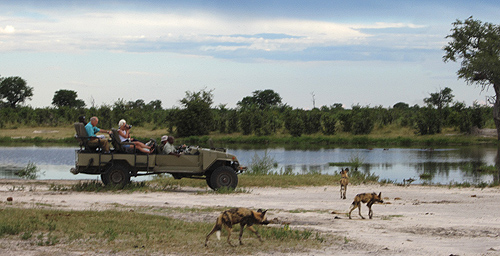 We just completed a fabulous safari in Botswana that believe it or not actually had a first for this safari guide of forty years: a wild dog hunt!

We were hardly ten minutes out game viewing from Lebala Camp in the Linyanti Reserve when our guide said dog had been sighted. We were only ten minutes away, and what a thrill to drive slowly on a road that 11 wild dog siestas were now occupying! 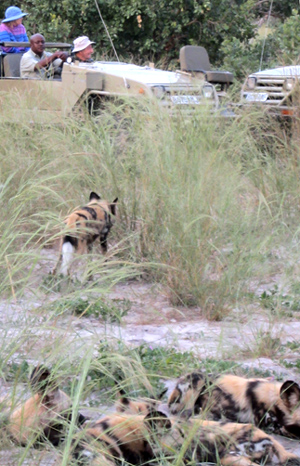 Most of the dog sightings I remember are deep in bush shade or scattered helter-skelter over uneven terrain difficult to view. Here we sat, on flat open country, capable of tracing the beautiful palomino markings of eleven wild dog!

But it got better. The curious hyper greeting behavior that precedes one of their hunts began, and we knew a very rare opportunity was at hand. Sure enough, the alpha male began nervous ear pricking and sniffing in the air. After another short hiatus of rest, the alpha male and female and the only other adult dog, another female, went stomping off with the kids anxiously following.

That’s when it gets interesting and if we weren’t in cars designed for bushwacking it would have been impossible. These were old South African Yuris, the military vehicles used in the Angolan and Caprivi wars. They go anywhere, do anything, although often at the expense of your oscillating body positions.

Still it was hard to follow them. We had three vehicles but none could keep up with the forward adult females. We stuck with the male. Every once in a while he would stop and listen, and we would turn off the engine so as not to distract him. There were impala all over the place. 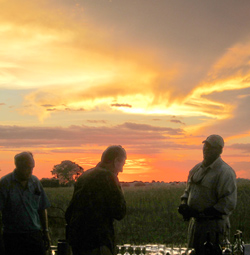 The other two cars watched the youngsters try to attack a warthog with two piglets. Eight-month old dogs are nearly three-quarters full size, but mama warthog managed to send them fleeing when she challenged them.

When our car lost the alpha male all three vehicles rendez-voused with the pups and soon an adult female came running back to regurgitate, indicating she had killed. Dogs are the only predator that ensures the young eat first. The adult who kills eats only a few internal organs before racing back to feed the pups.

Interestingly, the adult female then laid down as if to rest, with the kids all around her. But then there was a distinctive high pitched dog scream, and the whole bunch went shooting towards it like a bevy of fired canons.

The call was from the alpha female. She had returned a ways, but was waiting for them to take them to the actual kill. We were able to follow. It was remarkable how quickly the impala was dismembered and dispatched. True to form, these are gruesome killers. 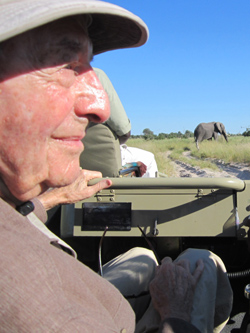 Our safari was filled with other exciting moments, especially a number of great elephant encounters in both the Okavango Delta and Linyanti. We had dramatic encounters with lion in the Kalahari, one of my favorite places, and saw the zebra migration in Nxai Pan. We saw over 300 species of birds and 15 larger mammals including roan and sable antelope, as well as the rare sitatunga.

March is a hot time and rainy time in Botswana. The Kalahari had temperatures over 100F, although in most places it was in the mid 80s. But it is precisely because of this that the game viewing was so exceptionally good, in contrast to Botswana’s winter when actually the majority of travelers visit.

And this end of summer is a rainbow of beauty. The veld is still fresh with blossoming wild flowers and the acacias, jackalberries, wild gardenias and even Baobab trees are in full leaf! The great grasses, including the turpentine grass, are fully matured waving seed in the warm breezes. The veld is absolutely at its most beautiful!

But of all our experiences, the wild dog hunt stands out. A first for me!