Paolo Bacigalupi is a master science fiction writer, and winner of the Hugo, Nebula, and any other Sci-fi award you can think of.

His blockbuster hit was entitled “The Windup Girl.”

The story imagined a world in the near-mid future where food-crop biodiversity had plunged due to constant genetic tampering in an effort to feed a growing planet with less available water.

Land, original seeds, and calories became the only currencies that mattered.

We are far from that, but sometimes I will read an article on “land grabs” in Africa and think that Mr. Bacigalupi was more of a slight exaggerator than an all-out lunatic. 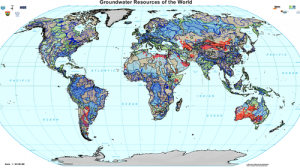 Everyone wants a piece of the mother continent these days. Not- as you might have heard- just the Chinese.

Even South Africa recently bought tens of thousands of hectares in Guinea!

Other investors are Asian, European and American, as well as private pension funds and a number of Scandinavian and gulf state sovereign wealth funds.

Anyway, who wouldn’t want in on African land?

In Europe, land costs about $22,000 per hectare (Germany) annually.

I could even afford some!

It also nicely diversifies a more traditional investment portfolio and promises to produce profitably as larger and larger players compete for fewer and fewer available commodities from here on out.

In many ways, the problem is not land; it’s water.

Let me quote from a recent study by the Oakland Institute: “If all the 40 million hectares of land that were acquired on the [African] continent in 2009 come under cultivation, a staggering volume of water would be required for irrigation (…) approximately twice the volume of water that was used for agriculture in all of Africa in 2005.”

Some African countries have water to spare in the short term.

Others never had any.

Many pastoral and nomadic communities have negotiated (or fought over) water rights for centuries.

If their governments’ lease their land to commercial producers, they may find access to critical water sources blocked by barbwire plantation fences.

People do not suffer this lightly.

Foreign investors recently gained title to 544,567 hectares of land in Mali along the Niger river.

These new concessions will suck up about two times the entirety of Mali’s water consumption in 2000. As of today the level of the Niger river is already 30% less than in 1980. (source)

The Omo and Nile river systems are similarly fragile.

Modern capitalism still has trouble pricing in environmental externalities and some forms of risk.

Water table depletion poses obvious risks to the environment, but on the flip side, there are reputational and monetary risks for investment projects.

Do these investors doubt for a second that a new administration facing acute domestic pressure to stop land grabs would not alter the terms of an existing contract?

Or, do foreign investors really want pictures of displaced villagers circulating among shareholders?

For example – in 2008 three people died in Uganda in riots protesting a land concession. Read this article on unrest in Guinea over an earlier land grab.

I wonder if investors are accurately assessing this types of socio-environmental risk when they sign 100 year leases.

Ironically, when the leases are for a full century, investor incentives align behind environmental and social stewardship, while the local politicians have a much shorter time horizon and might be willing to make fast cash at the expense of a small subset of their citizens.