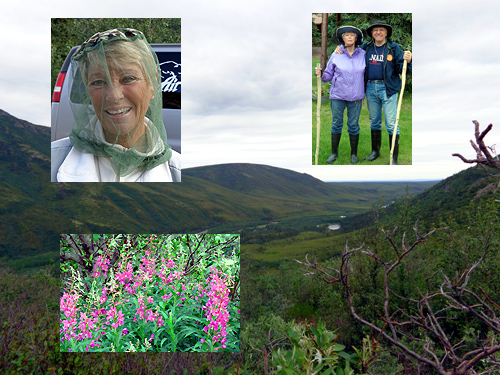 Yes you’ll see some wildlife, but Denali National Park impresses with its massiveness, scenery that simply exists nowhere else on earth.

We spent two days in the park, which is what all casual visitors do. Denali attracts the serious backpacker and hiker as well, and I can only imagine what a wonderful adventure that would be, but probably 95% of its million visitors annually are two-nighters who step in and step out rather quickly.

The park is a long, narrow protected wilderness with North America’s largest peak, Mt. McKinley at its far western end. There is a single road that stretches west from the train station at the parks main entrance, about 90 miles west to the tiny town of Kantishna which is just outside the park.

Kantishna was once a roaring mining town, and in fact we would see dozens of small mining operations that still exist when we flew out of Kantishna two days later. But today the town is mainly the service depot for the three lodges that exist on this far western side of the park.

This is where I take my groups. There are only about 300 bednights here, compared to the 3000 bednights at the train depot. This is also where Wonder Lake is, and some of the most magnificent hiking a “casual visitor” can undertake.

Most visitors staying on the eastern side buy a park pass for a day. This allows you to ride the regular park buses between the four ranger stations along the route, where you can disembark and hike as well as enjoy park ranger presentations.

For those of us staying in the west we take a lodge bus that picks us up at the depot and travels across the entire park, making stops at ranger stations and for wildlife. The ride takes about six hours.

No matter what month of the summer that I travel this route: June, July or August, my experience has been pretty much the same with regards to wildlife.

We’ll see a dozen or caribou, usually at several hundred yards. We’ll see 3-5 bears, often much further away, and dozens of dall sheep, but sometimes miles away on a distant rockface. In my many trips here I’ve also seen wolf, wolverine, pica, porcupine and fox, but only a couple times and this is considered rare.

The closest animal seen is the moose, and we saw our requisite couple, although last year I remember a third one practically sticking its nose through our bus window.

Unlike Africa, the buses – whether lodge or park – are all school bus types, not very comfortable and not particularly good for photographing, although their height off the ground is helpful.

So seeing wildlife should not really be an object of your visit to Denali. It doesn’t have to be!

The scenery is well undescribable. The stops at ranger stations where you can go wandering for a few minutes take you into an unbelievable land, a primeval cartoon as I see it. Distances are unfathomable. The sky – even when overcast, which is mostly the case – is spectacular.

And for our full day at the far western end, most of us went hiking. Excellent guides take small groups in a variety of directions, but wherever you go, however strenuous you wish to make it, the concept of panorama takes on new meaning.

So much of our planet must be like this. I’ve seen it, of course, in the remote parks of Africa and many lucky souls experience in even more remote places like Antarctica. Why this seems beautiful to us is a question that has plagued me all my life, because it is essentially not a quest for understanding as much as an acceptance of the foundation of the definition of what beauty is.

The closer you come to grasping this natural immensity, the more insignificant your person becomes. And frankly, I can’t really think of a better result for any of us.

As is almost always the case, our weather was not sunny and clear. It was heavily overcast and often misty. But it stopped none of us from thrusting ourselves into the wide open spaces and refreshing our souls.