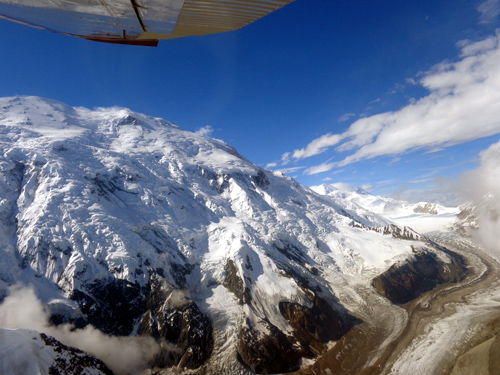 Today we picked up three little planes and flew from the northwest side of Mt. McKinley to the southeast side … with our fingers crossed!

And we made it! Pilots say the chances of flightseeing around North America’s largest mountain are about 10%, but I figure they low ball the truth to make many clients feel better. My own experience is about 50%. 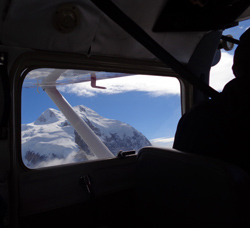 Certainly, it’s chancy. But there are backups. And even if you can’t see the mountain, cutting out the return 6-hour drive from the great western lodges to the rail station is worth the price of admission.

Backup Plan A is to simply fly straight east, not tempting the mountain’s own fickle weather, to the rail depot where you pick up the train journey.

Backup Plan B is to do what 90% of all the people who stay at the western lodges do, take the 6-hour bus ride back to the train.

But we lucked out. This group is bringing us a lot of good karma an we were able to fly all the way from Kantishna to Talkeetna, with jaw-dropping, breath-taking flightseeing en route! 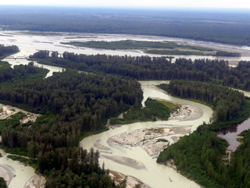 Lots of photos were taken, of course, but everyone agreed that you just can’t capture the majesty of this “thing” on film. Example: Sarah Taylor and Becky Krantz were sitting in the back seat of our little single-engine Cessna as we seemed to be crashing into the side of the North Face!

The North Face is over 20,000 feet high and we were planing out around 11,700′. After a bit of a little scream and request through our intercom to the pilot if we were, indeed, crashing, he said we were still 8½ miles away from the rock face!

We flew in and out of Peters Pass and other divisions between the two great peaks of the North and South. We flew along the 11,000′ sheet near vertical Wickersham Wall that only a handful of climbers have even tried.

So we left Kantishna at 1030a and arrived Talkeetna at just before noon. We then had fours before the noon train from Denali arrived, so we wandered this amazing little town, whose ubiquitous bumper sticker reads, “Talkeetna: A Drinking Village with a Climbing Problem.” 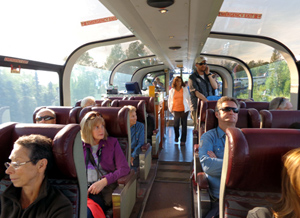 This is where all the real climbs of McKinley begin. I used some of my time to wander to the Alaska Mountaineering School, the principal guider and outfitting of professional McKinley climbs.

They were just wrapping up the season. The last few climbers were scheduled to come down today. A total of 1246 climbers tried it this season (AMS outfitted about half of them) and there was a 36% success rate to the summit, better than normal.

So after visiting Nagley’s General Store and its remarkable antiques set against animal furs, and trying the great Roadhouse ice cream, visiting the Ranger station and little museum, we got on the train to Anchorage for our final moments in the Great North. 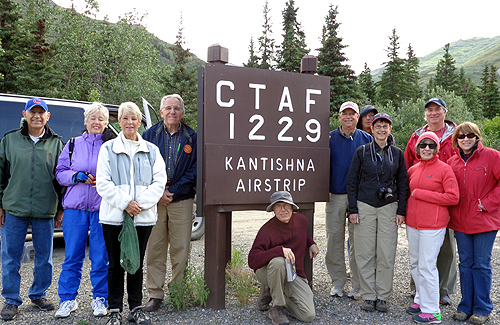 Now – on to Glacier Bay! I’m afraid there’s no internet on our luxury yacht in Glacier Bay, so I’ll be silent most of this week. But stay tuned! You’ll get a report as soon as I get a signal!