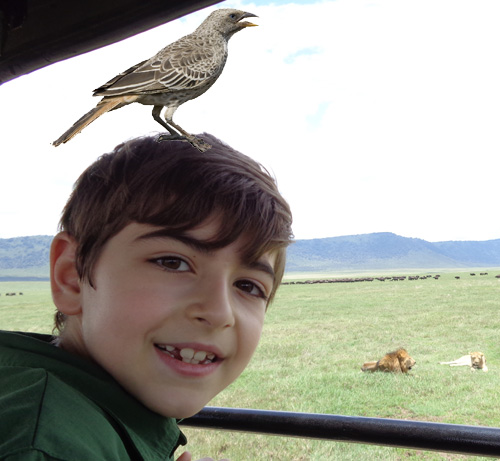 Why did the rufous-tailed weaver perch on Max’s head? Why did we see 14 black rhinos together? Why were we pinned in the crater’s only forest by over 100 elephant?

The crater has always been outside the wild. This unbelievable natural structure, the remnants of what was once the world’s highest structure ended by what must have been the most catastrophic volcanic event in the history of the planet, has always defied natural balance.

Here was where the British authorities first placed restrictions on how you could hunt. The animals were just too tame, it seemed in he 1950s. It was just too easy to shoot them.

Several times yesterday I had to contain myself from slapping the behind of a zebra, and that ridiculous opportunity has presented itself every one of the hundred times I’ve been to the crater over the last forty years.

Yet when that same zebra walks over the Senego trail out of the crater onto the Olduvai plains, it won’t let us get anywhere near him.

Wild animal behavior, like the mystical micro-climate that dances around the 1800-foot high 37-mile crater rim, defies logic in the crater. Researchers have stopped studying animals in the crater; they just don’t act normally.

But I think that’s presumptive, frankly. What I see from the crater is the more profound fact that nature is no longer in balance and hasn’t been for a long time.

When the Gibb’s guide Pascali took the kids on a forest walk a few days ago, they asked him about the elephants and school houses. He was discreet. He said yes we love the elephants, but we also have to go to school.

Hybridization of the golden and black-backed jackal probably began here. The last of the world’s greatest elephant with tusks like they’re supposed to be, stretching from a 12-foot high eye down to the ground, will die with the last of the giant tembo in the crater.

The crater is like a wormhole into the future of wilderness. While many casual visitors see the field scientist’s Elysian Fields, it is in fact one of the most stressful places of any wilderness on earth. It’s a moment by moment documentary of the ending of wilderness.

What should we do? Do we shoo the weaver off Max’s head or give it a piece of breakfast muffin? Do we cull the elephants or let them plow down the very last of the beautiful acacia lehai, a tree like none other doomed to extinction?

Do we separate the golden and black-backed jackal the way the Bronx Zoo separates its unintended bird hybrids in the zoo?

Do we add more ranger cars to protect the “wild” black rhino, that would never have dared to stand next to another rhino except to breed but today clusters in “packs” of more than a dozen?

Do we consider, as grandpa Mort suggested in an email he sent around today, that we get rid of all the zoos?

What is to become of the wild?

I really, really don’t know. But I know in this dynamic, stressful and indescribably beautiful crater, there’s a clue. I just don’t get it, yet.