Skip to content
Our game viewing was exceptional, as I expect at this time of the year, but what was uniquely special was lingering for so long among the great herds, truly the greatest wildlife spectacle on earth.

Yes, we saw hundreds if not thousands of the world’s largest mammal and hundreds of its largest antelope, the eland, and dozens of its smallest, the dik-dik.

Yes, we saw Africa’s smallest owl, the pearl-spotted owlet; a mating dance of Africa’s largest owls, the Verreaux Eagle Owl; and the rare and funny crepuscular marsh owl hopping among the thick grass.

Yes, we saw nearly 50 lion and several kills, and yes, we watched a male cheetah stalk, run, kill and eat a baby wildebeest.

We saw hundreds of hippos and lots of crocs, 16 black rhino, goshawks and bateleurs hunting, giraffes galore, warthog and jackal (three kinds) and lots and lots of menacing hyena.

We saw a really weird white rupell’s (Nubian) vulture (which I’ve never seen before since the bird is always black) and at least a dozen bat-eared fox, steenbok, reedbok and even oribi. Waterbuck, impala, buffalo, grants gazelle, oodles of ostrich and we were inundated with erupting termite mounds after a heavy rain.

But what I’ll remember is the great migration.

The “great migration” is a much misused term, and I admit to being one of the most egregious users. Many tens of thousands of kinds of animals migrate, and each migration is different.

Some animal migrations like with most birds are precise and predictable, year after year. Many more, as with the great wildebeest migration, are triggered by available food sources and much less precise.

In the case of the great migration through the Serengeti ecosystem, 1½ million white-bearded gnu (wildebeest) constantly move in search of better grasslands. But sometimes I think they just move because that’s how they’re hard-wired.

I’ve often seen tens of thousands of wilde leave a beautiful area of new grass with no earthly reason why or linger among the dust when the horizon is filled with rain.

Each year’s wilde migration is different. Roughly clockwise, roughly beginning in the southern Serengeti with the birth of new wilde, they’re joined by more than a half million zebra in a year’s trek north and back south again, following the better grasslands which bloom with the rains that slowly recede into Lake Victoria.

The entire first half of the year in Tanzania is the bountiful rainy season that draws them to the southern grassland plains of the Serengeti. There the young ones feast on nutrient grasses, growing strong enough for a raced migration north when the rains stop.

But where exactly in this 2000 sq. mile southern plains area the millions of wilde and zebra are at any given moment is impossible to predict.

They could be scattered in groups of twenty thousand in twenty different places. They could be spread out, 100 to the mile, when the grazing is at its optimum.

Or, as with us this year, they could be concentrated. I think the entire two million plus animals are right now concentrated in an area hardly 20 miles long by about ten miles wide in the south eastern Serengeti.

We found them the moment we turned into Olduvai having left the crater, and we were among them as we traveled more than 50 miles up and around and back to Lake Ndutu. Until we reached the main Serengeti road, we were driving off-road completely, seeing the entire day a single other vehicle, but millions of animals.

And we were never not surrounded from horizon to horizon by the animals.

It was a migration to be remembered. It was provided by a good measure of luck and a lot of common sense about when the right time and right place to be is. We played the averages, and this time was bingo.

Having lunch about 2000 feet above the grassland plains we could see about 30 miles in all directions. And there it was, mother earth’s greatest wildlife spectacle on earth. 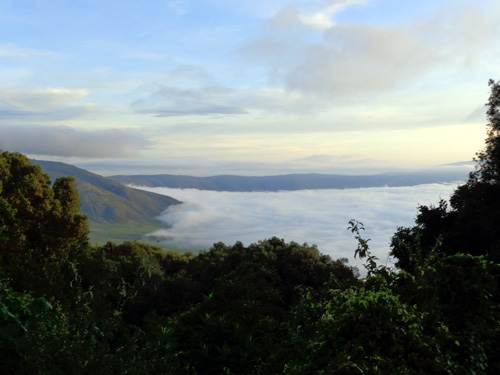