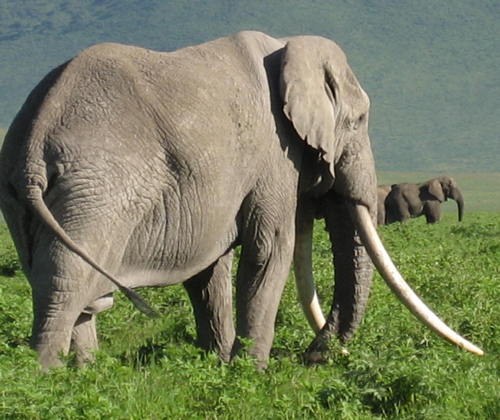 Of the many animal attractions in Ngorongoro Crater, to me the most precious are the giant old tuskers who will soon be gone.

We saw several of them yesterday and today during our game drives. These are very old men, likely well into their sixties, who descended into the crater during the horrible years of poaching in the 1970s and 1980s.

They came down for the natural protection that the crater afforded them from the well organized and well mechanized corporate poaching of the times that decimated Tanzania’s elephant population in less than a decade.

At the time they were no different than all the rest of the elephant; depending upon how you see it, they were the cowards or the geniuses.

In those horrible years of poaching large helicopters flew over the veld at night with spotlights and bazooka launchers. I would watch them with binoculars from my lodge balcony.

The spots would fall on the veld and a decision would be made that there were enough big tuskers, or not enough. If not enough, the spot went off and the helicopter moved off. If enough, the bazookas were fired, the nets lowered, and the ivory harvested.

It was so regular and routine that in a short time only elephants with no tusks or small tusks were left in the population. Except for the several dozen that went into the crater.

The crater isn’t a good habitat for elephant: there aren’t enough trees and bushes, it’s mostly grass. But over the years the big tuskers learned to survive on that and well after the years of horrible poaching ended, they remained down in the crater.

When finally the poaching had been controlled, other elephants began to descend into the crater as the elephant population rebounded at the same time that their habitat was diminishing.

But, unfortunately, the old men were no longer interested in the females that came down. Their genes weren’t propagated.

Most of the old men have died off, now. Only a few of the sort we were fortunate enough to see remain.

Of course our game drives in the crater included much more than these old guys. We saw a couple dozen lion and lots of cubs, dozens of hyaena, thousands of wildebeest, zebra and gazelle; plus eland, hartebeest, baboon and many birds. A lot of the European migrants have yet to leave.