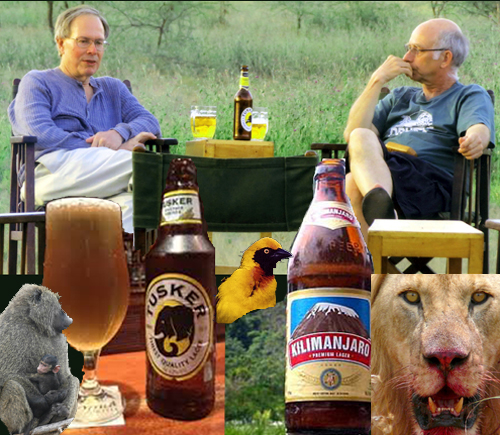 You might not find a lion. You might strike out on the migration. But you’ll never not be able to end the day with finding a good beer!

Good beer is something East Africa has had since colonial days, and for good reason, of course. The colonists were some of the finest brew makers in the world.

In the very early days, of course, the Cape of Good Hope was a “vitualling station” for the long voyages to Asia. Vitualling, or victualling, or however you want to apply a Herman Melville accent to a nonword, was how sailors recouped and if possible, prevented scurvy.

So you ate fruits. And since water was never ever safe to drink, you drank wine and beer!

Beer in East Africa in every epoch has been less expensive per glass than a similar amount of fresh fruit juice.

Today it’s about 80% the cost, but in the olden days it was far higher. Fruit was plentiful, but the individual efforts of squeezing were never mechanized or industrialized as quickly as beer making.

And long before the original Coors or later good microbreweries, East Africa’s brew was the best!

The two champions are Tusker in Kenya and Kilimanjaro in Tanzania. Both are considered very IPA in today’s race for depth and color, and both are moderate in alcohol content.

But what strikes me as so important is that they haven’t changed. In all the 40 years I’ve been living and coming here, they taste as good and exactly as good as they always have.

(Don’t think that new Tusker import stuff does it, either.)

So just remember that no matter how your day goes on safari, it can always end perfectly!