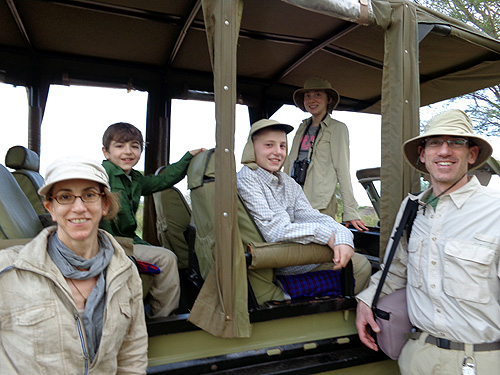 The Levin Family, all 8 of them; their outstanding guide, me; and the finest of safari vehicles and drivers, mine — were stopped dead in their tracks by a creature that weighs about 3 ounces.

The family arrived Tanzania in high spirits after having successfully navigated the calamitous winter weather of home. We spent the night at Lake Duluti Lodge after a late dinner, and grandfather Mort was certain that everyone would be down at the break of dawn to get going.

He was. And I was down only about a half hour later, and the two of us enjoyed wonderful hours of conversation while the family slept in. But we left on time, on our quick little neat charter from Arusha into the middle of Tarangire National Park, and before they woke up from their plane ride we were among elephants.

The rains have been normal and predictable this year, and the elephant population in the south where we landed isn’t quite as spectacular as it will become in a couple of months, but still the best in Africa. And shortly after lunch at Silale Swamp we came across a lioness and her four cubs, which we were to learn the next day was actually two litters of two cubs each, with one lioness babysitting while the other was out hunting.

Plus many more assorted elephant and lots of impala and then a beautiful Oliver’s Camp with an excellent meal. And great conversation and anticipation of the next day’s grand excursion to the far north of the park where the elephant population is resident and always exceptional.

So after a wonderful night’s sleep with lions roaring and thunder and lightning in the far distance, and for most of the night, birds singing because the moon is so bright, everyone was raring to go.

We raced back to the Silale Swamp picnic site, seeing assorted giraffe, hartebeest, gazelle, jackal and of course lots of elephant, and stopped for a pit stop when the little beast conquered the day.

There is one old gnarled and not very big acacia tree above the parking area to the picnic site, and as everyone was out of the car, a juvenile green mamba (about half size) fell onto the ground.

Great commotion as basically the poor creature skidded all over the sand while everyone was carefully watching it from a distance. But then I shouted to everyone to get into the car as I got worried about too much attention to the thing.

And then…
…it climbed into the undercarriage of the car.

So I screamed to Jared and Peter to get out of the car they’d just got into, and remarkably, Peter had in that short time already taken off his sneakers so he was a tad bit delayed.

Obviously, it was trying to climb back up, but there was the car, instead of the tree. The green mamba is a tree snake, not very large, not deadly but very poisonous.

We tried to tease it out and saw its tail and head, where the certain identification of red eyes confirmed mamba. Eight-year old Max was the first to confirm this, as I gently held him an appropriate distance from the car.

So what to do. Neither I nor either of my great drivers had ever had this experience in 40 years. On the one hand this snake, hardly 2½-feet long and probably two-thirds mature, packs plenty of venom to kill a tree rodent. And its mouth can hardly fit around anything larger than a tiny shrew.

Were it to bite a person, unheard of by any of us, the person would indeed get sick and hurt seriously, but it would not be life threatening. But that isn’t exactly what grandpa had in mine for the family vacation.

So with clients properly distanced, Bariki drove the vehicle back and forth into the grass, but the little devil wouldn’t come out.

After insect spray, stick throwing, water flushing and considerable amounts of cursing in Swahili, we were defeated.

Yes, if you’re wondering, a snake that thin could find numerous ways to sneak into the cabin of the car from the floorboard. And if it did, it would have a single motive: to climb upwards to where it normally lives, and it would not be able to discern too easily between a tree trunk or a human leg.

So the family piled into one Landrover with Tumaini, and Bariki and I drove back to camp where the vehicle was raised, flushed with water and kerosene and cans and cans of DOOM. Snake-free certified for tomorrow!